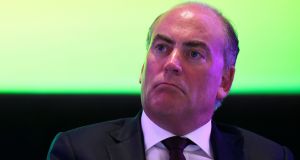 Portuguese lender Novo Banco, where former AIB chief financial officer Mark Bourke took over as finance head earlier this year, has agreed to sell almost €800 million of property assets and non-performing loans as it seeks to clean up its balance sheet.

The lender said on Monday it will sell €487.8 million of real-estate assets , comprised of 195 properties with industrial, commercial, land plots and residential uses, to funds managed by US distressed debt giant Cerberus by the end of the year.

Cerberus has also been one of the most aggressive buyers of problem Irish loans in recent years, two large portfolios from AIB within the last 16 months.

Novo Banco, which emerged from the ruins of Portuguese lender Banco Espirito Santo after its collapse in 2014, is 75 per cent owned by US private equity giant Lone Star, with the remainder in the hands of the Portuguese Resolution Fund.

Novo Banco’s chairman Byron Haynes told Reuters last month that the group expects to halve its non-performing loans (NPLs) ratio to 10 per cent this year or next to put it on a par with domestic rivals.

Analysts have speculated that Novo Banco could eventually be caught up in a wave of Portuguese banking sector consolidation but Mr Haynes pointed to the bank’s standalone business model, including investment in ongoing business, digital banking and franchise development.

The appointment of Mr Bourke has also prompted talk that Lone Star may seek to float the business in time. Mr Bourke was a key figure AIB’s return to the main Dublin and London stock markets in 2017.