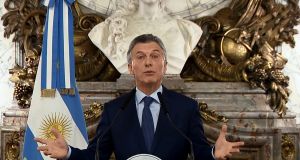 Argentina’s president Mauricio Macri during a televised address to the nation to announce austerity measures, on Monday. Photograph: AFP/Getty Images

Argentina’s peso slid on Tuesday as investors reacted with scepticism to President Mauricio Macri’s plans to cut the budget deficit, while a government delegation arrived in Washington for talks with the IMF about accelerating its standby finance deal.

On Monday, Mr Macri abandoned his gradual approach to balancing the government’s budget, announcing new taxes on exports and steep spending cuts to eliminate Argentina’s primary fiscal deficit next year. In exchange, he is asking for early cash disbursements from the $50 billion standby deal he negotiated with the Fund earlier this year.

The new measures were meant to assure investors that Argentina can pay its debts but financial markets remained wary of the government’s ability to push reforms through a restive Congress amid growing frustration on the streets of Buenos Aires.

The central bank auctioned $100 million in reserves on Tuesday to help prop up the peso, which fell 3 per cent to 39.4 to the US dollar on Tuesday. Last week alone the local currency lost 16 per cent of its value.

“It’s hard for the market to believe that a country like Argentina can hit its new fiscal targets over the short term,” said Sebastian Cisa, with Buenos Aires-based brokerage SBS. – Reuters