Capital reserve boost for bank as it raises €625m from debt 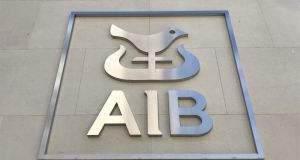 AIB: bonds were sold through a holding company set up at the top of the bank’s corporate tree in late 2017.

AIB raised €625 million to boost its capital reserves on Tuesday through the sale of the riskiest form of bank debt.

The bank received a total of €5 billion of orders for the bonds, known as Additional Tier 1 (AT1) notes, which were originally aimed at raising €500 million. However, the size of the transaction was increased due to strong demand from investors.

The notes, which rank just above equity in terms of recovery in the event of a company running in to financial trouble, were priced to carry an interest rate, or coupon, of 6.25 per cent. The rate was lower than the 7.5 per cent coupon that was attached to similar Bank of Ireland bonds issued in the middle of May as it reopened a segment of the market for European banks that had been closed for two months as investors fretted about Covid-19.

The two deals suggest that there is currently a strong degree of comfort in the debt markets surrounding Irish banks’ capital reserves.

The AIB deal was managed by bankers and traders at JP Morgan, Bank of America Merrill Lynch, Natwest Markets, UBS and Goodbody Stockbrokers.

Overseas institutional investors piled into the deal at a time when financial markets were cheering reports of a massive US infrastructure programme, signs that the EU and UK were preparing to redouble efforts to hammer out a post-Brexit trading deal.

Sources added that investors in the bonds also took comfort in the fact that a programme for government had finally been agreed by Fine Gael, Fianna Fáil and the Green Party on Monday, more than four months after the general election.

The AIB bonds were sold through a holding company set up at the top of the bank’s corporate tree in late 2017. As much as €250 million being raised from the sale of the AT1 notes is earmarked to buy back similar bonds outstanding at an operating company, which do not have the same capital benefits for the group.