Up to 11 per cent of mortgages subject to payment breaks in May, Central Bank says 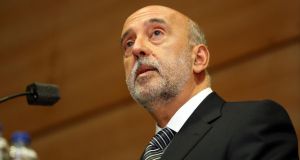 Almost half of Irish home loans are out to borrowers working in areas of the economy that have been affected by the Covid-19 crisis, according to the Central Bank.

These include people working in wholesale and retail, construction, accommodation and manufacturing. Still, only 11 per cent of mortgages, worth €10.1 billion, were subject to temporary payment breaks at the end of May, according to the bank in its latest biannual Financial Stability Review, a report on financial risks, published on Tuesday.

The regulator expects a “significant portion” of these loans will have to be restructured, generating losses for the banks.

In addition, 63 per cent of Irish banks’ commercial lending, or €37 billion, is exposed to companies that have either direct or intermediate exposures to the economic turmoil created by the pandemic, according to the report.

While the Central Bank said that households, businesses and banks entered a lockdown of the economy in recent months in better financial shape than before the 2008 global financial crash, the economic shock currently being dealt with “has quite simply been unprecedented in scale and speed, and the medium- to longer-term impact has yet to fully materialise”.

“Unlike the experience of a decade ago, the financial system is not the origin of the current challenges but, like the rest of the economy, it is affected by them. We are perhaps only at the end of the beginning of seeing those challenges emerge,” said Central Bank governor Gabriel Makhlouf.

Still, the downside risks caused by Covid-19 have been mitigated by unprecedented central bank and government supports announced in recent months globally, the bank said.

This includes over a million Irish citizens availing of special pandemic unemployment benefits or having their salaries topped up by a Government wage subsidy.

“Depending on the success of the containment measures, most current projections expect that the worst of the economic impact will be evident in the second quarter of 2020, with a gradual recovery to begin in the third quarter,” the report said.

“Even with this trajectory, the unemployment rate is still expected to average in the mid-teens for 2020 as a whole, with the domestic economy to contract by between 9 and 15 per cent.”

Mr Makhlouf said on a call with reporters that the ultimate effect on the economy will depend to a large extent on the path of the virus and whether a vaccine can be developed.

While Irish banks have higher capital levels than the European average to absorb shock losses – as a result of State bailouts during the last crisis and lenders putting profits into their reserves in recent years – their “resilience is not infinite,” the governor warned.

The Covid-19 shock is expected to put pressure on banks’ capital position as asset quality deteriorates, and a large volume of loans that had been restructured following the financial crisis “represent a vulnerability”, the report said.

“The longer it takes to combat the public-health crisis, the greater the risks to the macro-financial outlook and the likelihood that challenging liquidity conditions will turn into solvency issues for households, businesses and, by implication, parts of the financial sector,” it said.

Deputy Central Bank governor Ed Sibley said that banking supervisors are pressing banks to assess for various outcomes to ensure that they have enough capital and resources to deal with an expected surge in bad loans.