Consumer lending dropped to record low of €64m in April 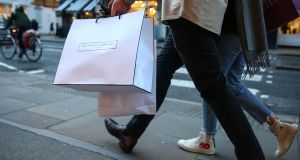 New consumer loan agreements in April were the lowest recorded since the series began back in 2003, the Central Bank said. Photograph: Hollie Adams/Getty Images

Consumer lending in the Irish economy dropped to a 17-year low of €64 million in April as economic activity stalled in the face of measures to contain the pandemic.

According to the Central Bank, this was down from €183 million the previous month and constituted the lowest level of new consumer loan agreements recorded since the series began back in 2003.

The bank’s monthly bulletin on retail interest rates also shows that new mortgage lending in the Republic declined steeply in April, falling by 40 per cent to €407 million.

Of this, €325 million was agreed in new fixed-rate mortgages, a decrease of 36 per cent on the previous month, while new variable-rate mortgage agreements declined by 51 per cent to €82 million.

“Given the Covid-19 pandemic was at its height during the month the 40 per cent drop is not surprising at one level but at another the magnitude of it is likely to signal a much more cautious lending attitude by lenders, as well as consumers,” said Rachel McGovern of Brokers Ireland.

“A lot now depends on how quickly the country can recover from the devastation of the pandemic and how employment levels will hold up,” she said.

Inside Business with Ciarán Hancock · "Whatever way you do the maths, I don't see us all surviving" - Covid-19's Impact on Hospitality
Coronavirus Data Dashboard

The Central Bank said fixed-rate mortgages (including renegotiations) accounted for 75 per cent of all new agreements in the three months to April. This compared with 82 per cent of new agreements for the same period in the euro area.

The ultra-low interest rate environment internationally has, however, resulted in some lenders pricing fixed-rate loans lower than variable ones.

The weighted average interest rate on new mortgages agreed in Ireland stood at 2.78 per cent in April, while the average for the euro area stood at 1.29 per cent.

Although the rate varied considerably across countries, Ireland had the third highest mortgage interest rates across the euro area in April, it said.

“Month after month, the CBI data highlights the stark contrast between what Irish mortgage holders are paying in interest, when compared with their European counterparts – and the difference is now in the region of 1.49 per cent – with Irish homeowners paying more,” Trevor Grant of Association of Irish Mortgage Advisers said.

“ While it’s not a like-for-like comparison, and a variety of factors influence the higher rates charged by lenders here, the figures do shine a light on rates and that is to be welcomed,” he said.

Separate statistics, published by the Central Bank, show insurance corporations here held about €337 billion in assets in the first quarter of 2020, down from €363 billion in the previous quarter.

“The falls are predominantly due to the market valuation declines, reflecting the initial effects of Covid-19,” it said.