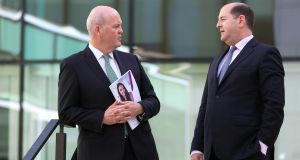 AIB chief executive Colin Hunt and his chief financial officer, Donal Galvin, spent much of their first year at the helm working on a three-year strategy to make the bank a backable prospect for investors.

Their plan, unveiled on March 6th last, would be redundant within a week – as the rapid spread of Covid-19 forced the Government to announce initial restrictions.

“We were accused at the time of being excessively bearish on the economy outlook. We said that there were storm clouds gathering on the horizon in the form of Brexit – and the fact that, at that time, [there had been] a very, very long period of uninterrupted economic expansion,” Hunt told The Irish Times on Wednesday.

Few predicted the chaos that would unfold over the coming months, forcing Hunt and Galvin to revisit their plan, line by line, to see how they could deliver on the “North Star” target of an 8 per cent return on investors’ equity, which the chief executive calls “non-negotiable and a return that a business like this should aim to deliver for its shareholders”. Achieving this is key to the Government being able to claw back more of its €20.8 billion AIB crisis-time rescue bill.

While temporary bank payment breaks and Covid-19 jobless benefits and wage subsidies from the State have cushioned the economic shock, it’s inevitable that there will be a surge in problem households and business loans next year. Banks’ incomes have been further squeezed as the crisis has hit new lending, and will result in already-ultra-low interest rates remaining depressed for even longer.

On Wednesday, the AIB duo published the results of a strategic review, which sees them target a further €150 million of cost savings by 2023 by exiting some Dublin head office locations, merging urban branches, exiting small business lending in Britain, and tweaking a job-cuts plan that remains on target to cut 1,500 net jobs in the coming years. The deadline to achieve more than an 8 per cent return on tangible equity has also been pushed out by a year to 2023.

“The near-term outlook is more clouded than the medium-term outlook – which is a novelty. I could predict 2022 with a greater degree of confidence and comfort than January or February 2021,” says Hunt. “We’re still dealing with Brexit. Hopefully over the coming days we’ll get to a conclusion of [a trade deal]. It’s been hanging over a huge number of businesses in this country.”

The irony, of course, is that the food manufacturing and transport and logistics industries, which are most exposed to Brexit, have had a good Covid-19 pandemic so far.

Although banks have been on the vanguard of a global stocks rally in the past month as a result of increasingly promising news on the coronavirus vaccine front, economists predict it will be next year before corporate insolvencies and loan defaults really spike.

AIB shocked analysts over the summer by setting aside €1.2 billion of provisions to absorb an expected surge in loan losses from Covid-19 – and predicting a full-year charge of between €1.4 billion and €1.5 billion. Galvin says the bank has looked “comprehensively” at taking a big upfront charge for potential loan losses, so as not to “extend this out over a period of years”.

Hunt says that of the 76,000 payment breaks extended to households and business this year under an industry-wide approach, 88 per cent have returned to regular payments. This is “substantially higher” than what the bank initially expected, he said.

Hunt says the bank “hasn’t seen a significant uptick” in borrowers looking for forbearance during the period of Level-5 Covid-19 restrictions that expired earlier this week.

Galvin added that the Government’s move in the recent budget to provide businesses hit by restrictions with grants of up to €5,000 a week amounts to a “pretty material support mechanism”.

“To be absolutely honest, ourselves and every other business – and indeed every household – in the State was blind in March to what was happening,” says Hunt. “We did not have any idea at that point in time of the scale, or the longevity of the crisis. And as we approach the end of this year, I think that, from a confidence level, we’re in far, far better position across the country, because the array of uncertainties has been reduced. That said, we’re still dealing with very, very significant uncertainties out there.”

The Government, which has only recouped half of AIB’s rescue bill and has seen the value of its remaining 71 per cent bank stake slump from €8.5 billion to €3.2 billion in the past 2-1/2 years, will be hoping Hunt and Galvin’s second strategic plan will survive longer than their first. And deliver.