Bank of Ireland seeks to calm nerves of investors and taxpayers 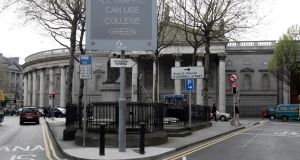 Shares in Bank of Ireland, which have been among the most sold off in the sector in Europe so far this year, slid by as much as 13.4 per cent in Dublin.

Bank of Ireland, still scarred by needing a €4.8 billion State bailout and imposing losses on junior bondholders during the financial crisis of a decade ago, has sought to reassure taxpayers and investors alike that it has enough capital to cope with a surge in loan losses stemming from the coronavirus pandemic.

The 14 per cent State-owned lender revealed on Monday it had taken a €266 million loan impairment charge for the first quarter and expects loan losses to rise significantly as the year progresses. The bank hasn’t yet seen many loans turn sour as a result of coronavirus. But it’s only a matter of time as it forecasts the Irish and UK economies will contract by 8 per cent and 8.5 per cent this year, with average unemployment rates rising to 13.5 per cent and 9 per cent, respectively.

Speaking on a call with analysts, group chief financial officer Myles O’Grady signalled that even in an unexpected scenario of gross domestic product (GDP) falling by 10 to 12 per cent this year, most of the losses from coronavirus, also known as Covid-19, will be accounted for in 2020.

Crucially, he said, the bank’s capital reserves will bottom out at a level above what was demanded by regulators before the pandemic – never mind taking into account how authorities have subsequently eased banks’ capital requirements.

While the hope, of course, is that the company will be right, no one knows how the pandemic will play out. Recent history has thought us that Irish banks don’t have the best track record in assessing downside risks.

Group chief executive Francesca McDonagh herself highlighted how the true depth of the downturn and the pace of recovery was unclear and that definitive forecasts are impossible.

“The economic recovery will be influenced by the effectiveness of the fiscal and monetary policies adopted to cushion and restart our economies,” she said on the call. “A second wave of infection and associated shutdowns can’t be ruled out – and the timescale for the development and rollout of a vaccine is uncertain.”

Nevertheless, the picture that Bank of Ireland has painted for business for the year looks grim, even as it holds onto the hope that an economic recovery will set in during the final months of 2020.

The bank sees gross lending volumes falling between 30 per cent and 50 per cent from last year’s €16.5 billion, lending margins also being squeezed, while business income is expected to slide by 30 to 40 per cent. It points to a more downbeat assessment than offered by many peers in Europe in recent times, though the bank’s executives say that they are being “prudent and conservative”.

The bank, which had a 26 per cent share of mortgage activity in Ireland in the first quarter, said that run rate of home loan applications and drawdowns was 50 per cent lower in April than the business it was doing over the previous three months. Total new lending was off 37 per cent, excluding the impact of small and medium-sized businesses drawing down on credit facilities to boost their cash positions in the midst of the crisis.

“Combined, this indicates total income will be up to 20 per cent below our current €2.8 billion forecast,” said Davy analyst Diarmaid Sheridan in a note to clients.

Shares in Bank of Ireland, which have been among the most sold off in the sector in Europe so far this year, slid by by 14.9 per cent in Dublin, leaving the company trading at 0.17 per cent of the value that the company puts on its assets.