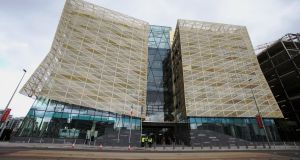 The Central Bank shows that as of the end of March, loss of ownership had occurred in respect of 71 homes and 142 buy-to-let properties related to the tracker scandal. Photograph: Niall Carson/PA Wire

Ulster Bank and Allied Irish Banks are responsible for the vast majority of an additional 3,400 loans that have been identified as having been affected by the tracker mortgage scandal.

The additional mortgages, details of which are contained in the latest report from the Central Bank, bring the number of affected customers to about 37,100.

The Central Bank has been investigating the scandal where banks either denied customers their right to a low-cost mortgage linked to the ECB’s main lending rate, or applied the incorrect rate.

In a statement, Ulster Bank said: “We are now in a position to confirm that 1,500-2,000 additional customers are impacted by the examination.”

Ulster Bank chief executive Gerry Mallon said he wanted to “reiterate my apology” to customers for the time it is taking to “make this right”.

AIB, meanwhile, said the number of its affected customers had risen by 1,800 to 5,800. Some 96 per cent of these have received payment and the remaining identified customers will be paid by June.

Bank of Ireland said offers of redress and compensation have been made in relation to 97.5 per cent of its affected customers. It has paid out €132 million so far.

KBC Bank said rates had been rectified on all 2,974 impacted accounts, and that redress and compensation “continues to be paid” to affected customers. Sources said the proportion of customers paid was now at about 68 per cent.

The Central Bank’s report also shows that as of the end of March, loss of ownership had occurred in respect of 71 homes and 142 buy-to-let properties.

The average redress and compensation paid to date in respect of loss of ownership of homes is about €133,000, while the average for buy-to-lets is higher at about €148,000 due to the greater amounts typically borrowed.

Total redress and compensation of €459 million had been paid as of the end of March, which represents an increase of €162 million since the December report. The regulator said the majority of affected customers had been identified, but that “some further increases” are expected before it concludes its investigation.

Offers are expected to be made in respect of the remaining customers by the end of June. Payments may extend beyond that date for any newly identified customers.

While about 63 per cent of redress and compensation payments to the end of March were up to the value of €10,000, about 2 per cent of affected customers received payments in excess of €100,000.

Of this latter category, 11 customers received redress and compensation in excess of €500,000.

The report said lenders ought not to expect the pressure on them to lift at the conclusion of the examination.

“It is critical to stress that numbers alone cannot give the full picture of the detrimental, and in some cases devastating, impact that lenders’ failures have had on tracker mortgage customers, up to and including the loss of homes and properties,” it said.

“While many lenders publicly state that they do put customers first, the evidence from the examination suggests otherwise. Lenders should not assume that when the examination concludes, the pressure on them will lift.”