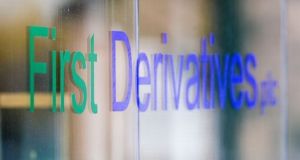 FD said on Wednesday it continued to trade strongly.

Newry based financial technology firm First Derivatives (FD) said on Wednesday that trading was strong in the second half of its financial year, as it forecast that full-year figures will beat expectations.

The group, which is listed in Dublin and London, said it continued to trade strongly in the second half of the financial year ended February 28th 2018. As a result, FD is now forecasting a financial performance slightly ahead of the current forecasts of £180.2 million of revenue and £32.9 million of adjusted earnings (EBITDA).

FD also said that it has completed its analysis of the impact of the US Tax Cuts and Jobs Act, which has resulted in a reduction in the US Federal corporate income tax rate from 35 per cent to 21 per cent.

“The US tax reform is expected to benefit the group through an ongoing reduction in the group’s effective tax rate of 4-6 per cent, in our preliminary view,” FD said.

FD os a [rovider of products and consulting services to some of the world’s largest finance, technology and energy institutions, and is the developer of the database technology kdb+. FD’s full-year results will be announced on May 22nd.