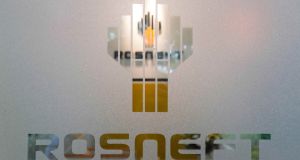 Rosneft, in which Qatar is set to become the third-largest shareholder after the Russian state and BP, said its profit was also supported by a one-off gain from a share acquisition in an upstream joint venture and the revaluation of a stake in another joint venture.

Headed by Igor Sechin, a close ally of Russian president Vladimir Putin, Rosneft said its revenue in the second quarter was 2.07 trillion roubles, up 48 per cent year-on-year.

Earnings before interest, tax, depreciation and amortisation (Ebitda) were 565 billion roubles, up 85 per cent.

“The second quarter was mainly a reflection of the management’s efforts to improve the efficiency of the company,” Sechin said.

Under Sechin, who took over the company in 2012, Rosneft has made huge acquisitions in Russia and abroad, including the $55 billion (€47.4 billion) takeover of local peer TNK-BP in 2013. That deal made Rosneft the world’s biggest listed oil firm by output.

According to the Aton brokerage, Rosneft’s net debt, excluding prepayments for oil supplies, was 3.3 trillion roubles at the end of the second quarter, equivalent to 1.8 times net debt/Ebitda.

That was 101 billion roubles less than the first quarter.

In May, Rosneft announced a plan to cut its debt and trading liabilities by a minimum of 500 billion roubles this year, partly by selling non-core assets.

Rosneft said on Tuesday that Venezuela owed it $3.6 billion in the second quarter of this year, down from $4 billion at the end of the previous quarter.

The firm added on Tuesday that by the end of 2018 it would be able to raise oil output by 250,000 bpd from a quota level agreed as part of an oil production deal between OPEC and non-OPEC countries.

It said it planned to put its new Russkoye oilfield in the northern Yamal Nenets region onstream by the end of the year.

Following an initial deal in 2016 between OPEC and non-OPEC producers to curb oil output, Rosneft said it could delay the start of production at some new fields, including eastern Siberia’s Uyrubcheno-Tokhomskoye and Russkoye.

Rosneft also said on Monday that its board of directors had approved the structure and parameters of a share buyback programme worth up to $2 billion.

The programme would run until the end of 2020 and Rosneft said it may partially cancel its treasury shares if needed. The maximum amount of shares and depositary receipts to be repurchased would not exceed 340 million shares, it said.