Aidan Heavey departs Tullow after 32 years at the helm 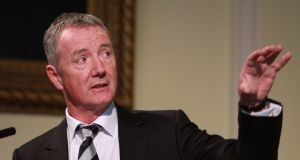 Tullow Oil founder Aidan Heavey is stepping down as chairman of the exploration group he founded 32 years ago.

Mr Heavey became chairman last year after more than three decades as chief executive. He had been expected to remain with Tullow until 2019.

“He founded Tullow 32 years ago as a small gas producer in Senegal and since then Tullow has had operations in 45 countries around the world including 20 countries in Africa, ” said Mr McDade.

Tullow is now widely recognised as the most successful Irish exploration company, despite recent setbacks suffered following the collapse of oil prices in 2014 .

An accountant from Co Roscommon, Mr Heavey set up the oil and gas explorer after working for Tullow Engineering in Co Carlow.

Tullow focused on buying assets that bigger players were selling or in which they were not interested. It began with Senegal in Africa, where in the mid-1980s the World Bank sought an entity to manage a range of gas-producing assets. From there, it moved into Bangladesh.

This gave Tullow the muscle for more deals. In 2004, it bought Energy Africa, an operator with licences to explore for oil and gas in countries such as Egypt, Ghana, Mauritania, Morocco and Uganda.

Tullow discovered and exploited oil off Ghana’s coast. It then found a field in Uganda’s Lake Albert Basin that could produce 200,000 barrels of oil a day.

It recruited French giant Total and Chinese player CNOCC to help develop this. Tullow is still developing Uganda, while it is working on a newer find in Kenya with the capacity to yield 80,000 barrels a day.

From the start Africa was a big focus for Tullow and for Mr Heavey personally. “He always felt that there were huge opportunities there, not just in oil and gas but in business in general,” said Job Langbroek, analyst with Dublin stockbrokers Davy.

Mr Heavey also believed that being Irish was a big advantage when it came to doing business on the continent, as locals do not see this country as they might a former colonial power.

His commercial instincts prompted him to pursue opportunities. At the same time he hired people with the right technical skills to make the assets he bought work.

“One of the unique things about Heavey was, and still is, the huge loyalty that Tullow staff had towards him, even when the company was running on fumes capital wise,” said Mr Langbroek. “He always believed that if you had the right people around you, things would work out in the end.”

Tullow blazed a trail in exploration terms in the Atlantic margins off Ghana and then in Uganda’s Rift Valley.

A move to Ghana’s geological “mirror” off South America looked like it would yield similar results, then turned out to be disappointing.

However, Tullow’s decision to persist there and buy licences in Guyana now looks like it could pay off as its blocks sit close to an area that Exxon believes could produce 4.5 billion barrels of oil.

Tullow’s pioneering approach enabled its shares go from virtual penny stock status to hit a high of £15 on the London market early in the decade.

Its fortunes turned as oil prices fell 60 per cent four years ago to less than $40 a barrel at one point.

This led to one of the most difficult periods in the company’s history. Deep staff cuts followed, though Tullow managed them without any bad blood.

Mr Langbroek believes it is now out of the woods, aided by a recovery in prices to about $80 a barrel. “Debt is down to $3 billion and the target is to get it to $2.5 billion,” he said.

The analyst believes that Tullow can live with this debt, which he predicts should amortise naturally.

At the same time, the transition from Mr Heavey to Mr McDade as chief executive has gone smoothly.

It was known in the industry that Mr Heavey did not want to leave the company he founded until he felt it was in better shape, which observers says has now been achieved.