Irish-based group to drill in Guyana, near where Exxon Mobil found 4bn barrels of crude 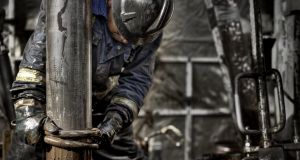 Tullow expects full-year production from working oil and gas wells in West Africa and the North Sea to be 89,000 to 95,000 barrels a day. File photograph: Getty Images

Explorer Tullow Oil will next year begin drilling in an area close to where rival Exxon Mobil has discovered four billion barrels of crude, worth about $300 billion (€256 billion) at current prices.

The Irish-based independent oil exploration and production group said on Wednesday that profit rose to $521 million in the first half of 2018 as revenue increased to $905 million.

US giant Exxon Mobil this week increased its estimate of the amount of oil the group believes can be recovered from an area it controls off the coast of Guyana in South America to four billion barrels from 3.2 billion.

Tullow has licences to explore a region between Exxon’s block and the Guyanese coast. Chief executive Paul McDade said that the Irish business is likely to begin drilling there next year.

He explained that Tullow’s technical staff were analysing data gathered from surveys of the Guyanese licences. “They are trying to select which will be the first wells that we will drill there,” added Mr McDade.

Exxon’s find is one of the biggest in recent years. Crude now trades around $75 to $80 a barrel, valuing four billion barrels at $300 billion or more.

Mr McDade argued that Tullow’s current net debt of $3.1 billion was still too much for the company.

It is focused on reducing this to a target of $2.5 billion while stepping up its actual business of exploring and developing oil prospects. It is investing $460 million in its assets this year.

Along with Guyana, it wants to press ahead with drilling projects in Kenya and Namibia in Africa in 2019.

Mr McDade said that Tullow also intended bringing its Uganda oil field, which it is developing with China’s CNOOC and French group Total, closer to production.

Mr McDade signalled that Tullow was keen to return money to shareholders, particularly as cash flow was strengthening, even though the board decided against an interim dividend.

“We do want to get back to paying a substantial dividend,” he said. “I can’t say when we will start paying it, it’s a decison for the board, we will look at it again at the year end.”

Profit after tax was $55 million for the six-month period ended June 30th, compared with a loss of $348 million a year earlier.

Overall, the company expects full-year production from working oil and gas wells in West Africa and the North Sea to be 89,000 to 95,000 barrels a day.

Meanwhile, the first incremental production from its Ghana drilling programme is expected in August; with a second rig due to start drilling in October.