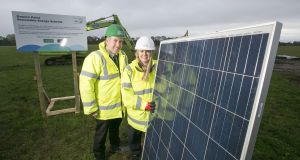 NI Water, which is the largest electricity user in Northern Ireland, has started work on a significant new £7 million solar farm on a 33 acre site in County Antrim.

The solar farm will supply electricity for NI Water’s Dunore water treatment works in South Antrim, which currently accounts for seven per cent of NI Water’s annual energy usage and is the company’s third largest site in terms of electricity requirements.

The company said its new solar farm is expected to produce a peak output of 4.99 megawatts once completed and could save it more than £500,000 on energy bills in the future.

The company is also hoping that any spare energy generated at the solar farm can be sold on to the grid.

Sara Venning, NI Water’s chief executive said as a major electricity user it is committed to reducing the impact of its energy requirements on the environment.

“NI Water expects to increase our electricity consumption from renewable sources from currently around 13 per cent to 40 per cent in 2020/21. This project will make a significant contribution towards our ability to achieve that stretching goal,” Ms Venning added.

The construction of the new solar farm is being carried out by Dromore headquartered GRAHAM Construction which expects to employ 30 people on the contract until it is completed next March.

UK consumer confidence falls after five months of gains 10:52
Sustainable investment: How your pension can help tackle climate change 05:30
‘We lost money on our planned wedding in Spain. Covid saw to that’ 05:30
RTÉ to seek 70 voluntary redundancies as ‘large costs’ beckon in 2021 05:00
Hurrah for the companies giving staff more time off 05:00