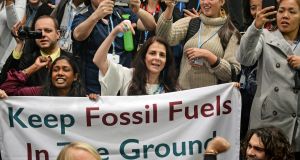 Stronger Chinese economic growth and greater use of coal will push global greenhouse gas emissions to a record high in 2017, according to a report issued at the UN climate talks in Bonn.

After remaining flat for three years, hopes of a turning point in the world’s efforts to curb climate change have been set back by the findings of the report by the Global Carbon Project, an international research consortium.

“The plateau of last year was not peak emissions after all,” conclude the researchers, a group of 76 scientists based in 15 countries.

Speaking at COP 23, Glen Peters of the Centre for International Climate Research in Oslo said China’s emissions of CO2 were set to rise by 3.5 per cent, driven by more coal demand and stronger economic growth. US emissions were set to decline by 0.4 per cent in 2017 – a smaller fall than in recent years, also reflecting more burning of coal.

Coal’s gains were linked to a rise in the price of natural gas that made coal more attractive in power plants, Mr Peters said, rather than the effects of US president Donald Trump’s pro-coal policies.

EU climate commissioner Miguel Arias Canete said Europe had been steadily reducing its emissions and has one of the most ambitious climate plans. “If other countries were as ambitious as us, perhaps emissions would not have risen so much,” he said.

Protesters temporally interrupted a US event to promote “the role of cleaner and more efficient fossil fuels and nuclear power in climate mitigation”. Panellists at the event argued renewable energies such as wind and solar power were insufficient to meet the world’s energy needs.

David Banks, Mr Trumps’s special assistant on energy and environment, told the meeting the panel was only controversial “if we choose to bury our heads in the sand” by ignoring the continued need for fossil fuels and nuclear power.

In response to coal lobbyists appearing alongside the US delegation at COP23, the climate spokesman for Christian Aid, Mohamed Adow, said: “Coming to a climate summit to promote coal is an act of vandalism against our common home. It is offensive to millions of people living with the impacts of climate change. It is morally bankrupt and coal companies like Peabody will soon be economically bankrupt, too.

“The world doesn’t need coal, renewables are cleaner and increasingly cheaper. As the International Energy Agency has said, wind and solar are also much better at reaching remote communities currently without power. Trump’s coal obsession shows just how out of touch he is with basic science and the rest of the world.”

Meanwhile 18 leading multinationals came together at COP23 to launch a strategy for adopting hydrogen as a fuel for the “world energy transition”. A Hydrogen Council study with analytical support from McKinsey suggests hydrogen technologies have an important role in achieving the commitments in the Paris climate accord, notably in transport.

It outlines how hydrogen technologies provide effective solutions for the integration of large-scale renewables in the energy system.

The study predicts the current hydrogen market is set to double over the next 15 years, a pace comparable to the growth of solar and wind. It also suggests that the high costs associated with supporting infrastructure will be overcome. “While there are no major technical bottlenecks to reach scale, there is a need to anticipate investments and build new business models to deploy these more broadly,” it adds.

Significant reductions have been achieved in the cost of refuelling stations, and fuel cell stack production has been halved in recent years. The report foresees major reductions in coming years from scaling up manufacturing to industrial levels. “The hydrogen opportunity therefore needs strong mobilisation from industrial players, investors and regulators alike,” it adds.