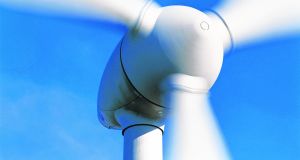 Canada’s Brookfield Renewable Partners has repaid half of the $350 million (€297 million) of investors’ money it used to help fund the purchase of wind-farm assets from the State under the terms of the country’s troika bailout programme.

It was part of a consortium, which also included UK power giant Centrica and Icon Infrastructure, that agreed to buy the power generation and electricity and supply assets of Bord Gáis, since renamed Ervia, for €1.12 billion in late 2013.

The sale, which was ultimately completed in June 2014, was carried out under terms of the Republic’s €67.5 billion international bailout programme.

Brookfield Renewable revealed in March it had disposed of 137mw of the former Bord Gáis portfolio – capable of powering more than 70,000 homes – to UK-based investment firm Greencoat Capital for an undisclosed sum. Greencoat subsequently put the assets into a vehicle called Greencoat Renewables, which floated on the Irish Stock Exchange in July following an initial public offering that raised €270 million for planned further wind asset purchases.

Brookfield Renewable told investors in an update last week that its 2014 Irish deal was funded by way of $390 million in debt and $350 million in equity. Since the transaction was closed, the firm has built out another 166mw of new projects.

“All told, we now have 370 megawatts operational in Ireland, an additional 78 megawatts under construction, cash flows are greater than we started and we have distributed over 50 per cent of our original cash investment as a dividend to the owners,” said Brookfield Renewable said.

Brookfield Renewable said earlier this year that the company remains “absolutely committed” to the Irish market and that the sale of about a fifth of the original portfolio was just an “opportunistic” move to recycle cash. In September last year, the company bought a 19mw wind development project in Ireland in an €8 million deal.