Division of international SSE electricity and gas has 780,000 customers in Ireland 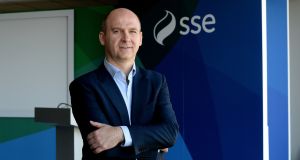 SSE also said that pretax profits in the six months ended September 30th fell 14 per cent to £409.6 million sterling (€463 million) as it stepped up capital spending and sold some assets.

Figures from its Irish division, SSE Airtricity, show that in the 12 months ended March 31st, its electricity and natural gas operations across Ireland earned profits of €43.79 million on turnover of €1.2 billion.

In the Republic, it supplies electricity and gas to consumers and businesses under the Airtricity brand. The group also owns the Great Island gas-fired power plant in Wexford and is building and operating several large wind farms.

SSE Airtricity Gas Supply (NI), the regulated natural gas supplier to the greater Belfast area, earned profits after tax of £1.89 million. The company reported a profit of £4.34 million in 2016, but those figures covered a 15-month period that included two winters, when demand for gas is strongest.

Its electricity business in Northern Ireland, SSE Airtricity Energy Supply (NI) had profits of £5.16 million, 14 per cent ahead of the previous financial year.

The group had more than 780,000 customers across the island on March 31st, making it one of the biggest players in the energy market here.

SSE will continue to supply power to homes and businesses in the Republic and Northern Ireland after its parent completes the Npower merger.

Stephen Wheeler, managing director of SSE Ireland, noted that the group recognised the differences between the Irish and British markets. He pointed out that the alignment of its wholesale and retail businesses across Ireland benefited customers.

“We have a strong customer base, an excellent portfolio of assets and an exciting range of investment opportunities across Ireland in energy supply and services, generation development, and wholesale telecoms,” he said.

SSE recently finished the final phase of the country’s biggest windfarm, Galway Wind Park, in partnership with State company, Coillte. It has the capacity to generate 174mw of electricity, equivalent to about four average-sized gas-fired power plants.