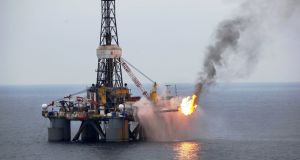 Gas prices also dropped 7 per cent month on month but remain over 49 per cent above the comparable period last year, while electricity prices rose by 3 per cent.

Oil prices dropped 6 per cent during the month, finally settling at $75.47 a barrel on concerns that weaker global growth would hit oil demand. Oil prices had trading close to a four-year high of $85 a barrel at the start of October, driven by concerns that imminent US sanctions on Iran would tighten oil markets globally.

The market is now awaiting November 4th, when Iranian sanctions come into full effect with oil exports from Iran already fallen by 700,000 barrels per day since May.

Gas prices also dropped 7 per cent month on month but remain over 49 per cent above the comparable period last year, while electricity prices rose by 3 per cent.

“All components however continue to remain well above the levels seen at this time last year. Weakening global economic growth and falling stock markets were key drivers of the oil price during the month whilst warmer temperatures and robust Russian and Norwegian imports pushed down gas prices,” he said.