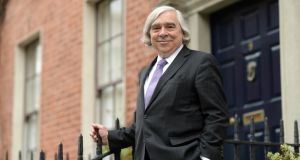 US secretary of energy Dr Ernest Moniz: “I think after the Paris accord the world is heading to a low-carbon economy.” Photograph: Dara Mac Donaill

There are grounds for optimism on the global response to climate change, though most countries are “off the pace” required to fulfil their obligations under the Paris agreement, according to former US secretary of energy Dr Ernest Moniz.

In spite of President Donald Trump’s announcement of a US withdrawal from the agreement, Moniz highlights the clear message of US mayors, governors, business leaders and states including some of the red (Republican) variety: “we’re sticking with this” – in moving to a low-carbon economy.

He stresses, however, he does not want to be pollyannish. He is mindful of the recent UN report on keeping global temperature rise to within 1.5 degrees above pre-industrial levels which underlined the need for decarbonisation within “an unprecedentedly short transition period”.

“I have to admit 2 degrees is not going to be a walk in the park, to put it mildly. We have to fight for every tenth of a degree,” adds Moniz who served in the Obama administration and is now head of the Energy Futures Initiative – a not-for-profit Washington-based energy innovation think tank.

The Paris accord was an important first step, he adds, but it will not deliver the scale of “deep decarbonisation” required to address global warming. That said, he believes, three of the biggest economies in the world “are marching to low carbon”; the US – in spite of Trump – China and Europe.

“I think after the Paris accord the world is heading to a low-carbon economy. You can like it, you can dislike it. But I would suggest it is pretty close to a fact, and in the end, the science and evolving public opinion will drive the decarbonisation process forward.”

Moreover, he is encouraged by the confluence of climate and social justice agendas when he attended a meeting with global oil and gas chief executives in the Vatican last year.

In an address at an event this week in Dublin hosted by the Institute of International and European Affairs and the ESB, Moniz provided a comprehensive account of what will be needed (nothing short of “deep decarbonisation”); where we are off the pace, and the immense scale of innovation required. The end point is clear: that target has to be achieved in “industrialised societies on a mid-century time frame”.

He admits the path to that point is not yet fully laid out and crucial steps along the way will need boosters in the form of innovation and big scientific breakthroughs. His address is peppered with observations on key elements and the conclusion this is “still not enough” – though he’s in the optimists’ camp as a “glass two-thirds full” guy.

The energy system has been evolving at an incredible speed. “This is providing opportunities and challenges, from global warming and climate change, to new challenges in energy security, to looking at economic development through new technologies.”

Deep decarbonisation is going to require deep innovation, including very large-scale carbon management such as carbon capture and storage (CCS) and “new ways of utilising CO2 that are durable and can sequester the gigaton-scales of CO2 necessary”.

He outlines the possibility of taking greenhouse gases out of the atmosphere by “direct air capture” and biological approaches such as re-engineering plants with very deep root systems to fix CO2. “This is tough stuff to get at large scale, at an economically acceptable point,” he says.

In the meantime decarbonisation of electricity generation is making significant progress, and the cost of renewable energy sources including batteries has dropped dramatically, but Moniz says this is not a silver bullet.

Decarbonising many other sectors, including electrification where possible, would be very hard – notably when it comes to heat, transport, air travel, buildings, industry and agriculture.

He acknowledges it’s somewhat controversial to say, “you cannot forget the role of natural gas as a transition bridge” to deep decarbonisation. It has facilitated the big switch away from coal but could become a problem when deep decarbonisation is being realised and its infrastructure risks becoming a stranded asset, unless CCS is part of the mix and other fuel sources are considered such as hydrogen.

He admits nuclear power had been associated with “very bad budget performance”, notably in Finland and in the US where two plants in Georgia were built at twice the original projected cost.

Within western Europe, the US and Canada, he does not expect “any gigawatt-scale plants” to be built for a long time. That said, nuclear has to be recognised as a low-carbon option, he insists – Moniz is a noted nuclear physicist who has been attached to MIT for many years.

Most promising, especially for the US, is the potential of small modular reactors, he says. They have very attractive safety features and come with new financial engineering options, ie can generate cash as they are built up, in contrast to the big risk associated in the form of massive capital costs associated with standard large reactors.

In the US and Canada, there has never been as much innovation in the nuclear sector, Moniz says; 50 private companies are working in nuclear fusion and fission. “If two get across the finishing line, we would be in good shape.” It requires demonstrating success at scale though supporting public funding would still be necessary to ensure realisation.

On carbon tax, he notes the US government has estimated the true “social cost of carbon” is $45 per tonne of CO2 generated, and some Republican heavyweights supported the idea of this form of pricing to turn the decarbonisation dial.

This would entail applying a socially-progressive tax, starting at that level, while at the same time giving a dividend to taxpayers by way of a cheque. Such a move will come together tied into a reduction in other incentives and changes in regulation for businesses “in the coming decade”.

His advice to the Government on increasing carbon tax is to ensure the move is contained in a package and that the measure be revenue neutral.

He believes the extent of climate change denial can be over-stated, as “it’s not rooted in any evaluation of the science”.

What should be an apolitical issue had become a political issue, he notes, with all the associated difficulties, but “the science is clear on the basic need for a prudent response to increasingly weird weather and all of its downsides”.

Moniz favours bottom-up innovation, regionally-focused, looking and starting from the workers in communities, mapping out a pattern of development at the local and regional level in line with a deeply decarbonised future. “If we don’t have all of our communities and all of our regions thinking that they can be part of this future, we will continue to have political headwinds.”

The huge cost of adaptation to climate change has become more into focus of late, which he predicts will sway the public.

To illustrate the costs of adaptation, he cited the case of Boston, whose city adaptation plan requires spending 10 per cent of its entire capital budget every year for the foreseeable future, including the building of sea barriers – when it’s already accepted this is “one quarter of magnitude less of what’s needed”.

Florida Power and Light, one of many utilities in the sunshine state, had already invested the better part of $4 billion hardening poles and building protection against flooding of its substations though “it doesn’t protect them from the monster storms they have seen recently”.

In the earlier part of the next decade the US will adopt a national “economy wide” approach to mitigating carbon emissions, Moniz predicts, and this in turn would contribute to a better collective global response to climate change.

On energy security, he stresses it is not something to be viewed simply in the national context but rather as “a collective responsibility among allies and friends”.

He articulates ways to enhance security including diversification of sources, of fuels, of supply routes and development of indigenous supplies of energy – not to mention embracing energy efficiency and reducing demand, which are critical to lowering reliance on fossil fuels.

Above all, he underlines “a low-carbon future because low-carbon tends to be almost automatically a security benefit”.

Moniz was one of the lead negotiators on the Iran nuclear agreement. He believes Trump’s withdrawal from the deal is a strategic error. Critically, the tough sanctions in place before the agreement came into force were effective because of international co-operation on enforcement, he says.

That international coherence was essential for sanctions to work. The US pull-out placed “an enormous wedge” between it and its allies, notably Europe, which now had to determine a way forward. Without international co-operation, sanctions would not be as strong as in the past.

There was a lot of misinformation about the agreement but it secured unprecedented verification. “It breaks new ground in multiple dimensions,” he adds, citing its most notable achievement; “getting access to any suspicious site within 24 days”.

The world is heading to a low-carbon future, which means “a multitrillion dollar global clean energy marketplace”.

This is because the second pillar of the Paris accord, called Mission Innovation (MI), is an agreement by countries and international investors to double clean energy research and development investments over a five-year ramp-up period.

Trump has consistently recommended cutting the clean energy budget twofold but congress did not follow that advice and increased spending on energy research and innovation over the past two years.

While there is not going to be a major shift in climate policy following Tuesday’s US midterm elections and setbacks such as Washington State rejecting a carbon tax, Moniz says bipartisan support for the energy innovation agenda is not going to be affected. Looking beyond that to states that have adopted new climate commitments, he is certain “the decarbonisation footprint grew” following the elections.

1 Coronavirus: Property rental in the jaws of the epidemic
2 Britain's supermarkets wrestle with coronavirus demand conundrum
3 French luxury groups U-turn on state support for jobs
4 I want to change my will quickly in case I fall ill. Do I need a lawyer?
5 Staff in Dublin and Cork airports receive profit share and bonuses for last year
6 Nama sets deadline for final bids on former glass bottle site in Ringsend
7 Business activity in Dublin grinds to a seven-year low due to Covid-19 impact
8 Tesla to expand lineup in China by offering Model 3 sedan
9 Airbnb secures $1bn investment from Silver Lake, Sixth Street
10 European and Asian shares rally for second straight day
Real news has value SUBSCRIBE