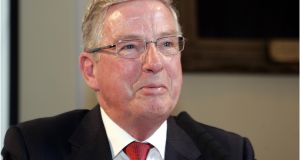 T5 Oil & Gas, an Africa-focused exploration company founded by a group of Tullow Oil veterans, has postponed plans for a Dublin and London stock market flotation and is considering a back-up option of selling a stake in itself to a strategic investor in the wake of a slump in oil prices in recent weeks.

The Irish Times has learned that the company, led by executive chairman Pat Plunkett, who chaired Tullow Oil between 2000 and 2011, has been holding talks in recent months with firms that could privately take a stake in T5. Another alternative could see T5 merge with another business.

These discussions had been going on even as the company advanced plans to raise $45 million (€39.7 million) through an initial public offering (IPO), which was originally earmarked for August but had been pushed out. Davy and London-based financial firms Shore Capital and Hannam & Partners have been advising T5.

The price of Brent crude oil – which had surged more than 40 per cent over the first nine months of 2018 to four-year highs – has fallen back by 22 per cent since early October to trade at about $67.30 on Wednesday.

While some analysts were speculating as recently as a month ago about the return of $100 oil, the commodity’s price has since been hit by record supply from Saudi Arabia, Russia and mounting concerns over the global economy.

The Paris-based International Energy Agency, which advises governments and companies on energy trends, said in its latest monthly market report, published on Wednesday, that the level of crude output from the world’s three biggest oil producers was causing global supply to significantly outstrip demand.

The Organization of the Petroleum Exporting Countries (OPEC) and its partners were reported by Reuters on Wednesday to be discussing a proposal to cut oil output to shore up prices.

T5 is looking to raise funds for a drilling programme in Gabon in west Africa, where it agreed last year to acquire a 45 per cent interest in a producing asset in a potentially transformational deal.

The so-called Owali Asset, made up of seven shallow-water oil fields, is producing 400 barrels of oil a day, the company told potential investors earlier this year.

Industry sources said that T5 would be expected to participate in an offshore oil and glass exploration licensing round launched by Gabon last week. Oil companies exploring offshore of the African country include Petronas, Noble Energy, ENI, Total and Shell.

1 Wetherspoon’s panto-villain chairman may have the last laugh
2 UK needs to be honest about its Covid-19 strategy
3 British exceptionalism backfires in style as Johnson tests positive for coronavirus
4 Will Covid-19 force Primark to rethink decision not to sell online?
5 Volkswagen burning through €2bn in cash per week
6 Rivian takes on Tesla with big batteries and subtler approach
7 Mobile, broadband suppliers to be given extra radio spectrum
8 ESB paying exchequer €88m dividend a pointless exercise
9 Remote working doesn’t suit everyone, and it exposes woolly leadership
10 Usit travel group in liquidation due to coronavirus crisis
Real news has value SUBSCRIBE