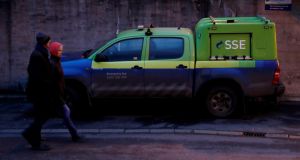 Energy supplier SSE plans to create a new company that will include its renewable energy assets in Britain and Ireland in order to improve transparency and help it raise investment, it said on Wednesday.

The move comes as SSE reported a 41 per cent slump in adjusted pre-tax profit, as losses widened at its energy supply business.

The new company, to be known as SSE Renewables, will comprise about 4 gigawatts (GW) of SSE’s existing renewable assets such as hydropower, onshore wind and several stakes in offshore wind projects.

SSE said creation of the new entity will provide greater visibility of assets and future earnings for investors and improve its ability to raise finance for projects.

Adjusted pretax profit at the company, which includes energy supply and networks as well as generation, slumped almost 41 per cent to £246.4 million (€282.3 million) for the six months to September 30th.

The company warned in September that profit would be hit as calm weather cut renewable output and a summer heatwave curbed demand.