Energy needs will not be met by natural gas, report warns 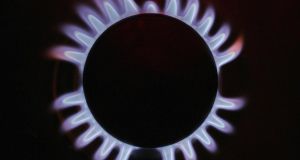 An Irish Academy of Engineering report claims substantial reliance on natural gas in the Irish energy system is unavoidable for at least 22 years.

Natural gas is not the solution for Ireland’s energy needs and also raises security-of-supply issues, according to a report published on Monday.

Any energy policy involving displacement of other fossil fuels in favour of natural gas, however, even on a “transitional” basis would greatly escalate security-of-supply risk, it concluded, “while simultaneously failing to achieve the required speed of decarbonisation of the Irish energy system”.

The independent report was commissioned by the campaign group Stop Climate Chaos (SCC) in response to a report by the Irish Academy of Engineering (IAE) in July.

Its authors include DCU professor of engineering Barry McMullin and Prof Kevin Anderson, chair of energy and climate at the University of Manchester.

The IAE report “is mistaken in severely underestimating the rate at which CO2 emissions from the Irish energy system must now be eliminated and in its discounting of the technical and economic feasibility of such rapid decarbonisation”, SCC said.

Based on Ireland’s large natural resource of variable renewable energy coupled with the use of synthetic chemical fuels (known as “electrofuels”) for very large-scale energy storage, “rapid fossil fuel phase-out is not only technically feasible, but can progressively eliminate the security-of-supply risks associated with all imported fossil fuels”, the report found.

Such measures are feasible while simultaneously decarbonising with the scale and urgency demanded by “good faith participation” in the Paris Agreement on Climate Change, the SCC report added.

It is recognised the Irish energy system carries a significant security-of-supply risk, due to heavy reliance on natural gas for the stability of the electricity system. “Given limited indigenous natural gas supply, this would introduce, by design, a potential single point of failure for almost the entire energy system,” the SCC report said.

The IAE report argued that substantial continued reliance on natural gas in the Irish energy system is unavoidable up to at least 2040.

Ireland would need new gas sources from the early 2020s and a terminal for importing liquid natural gas (LNG) among other measures to guarantee future energy security, it added.

Natural gas is used to generate about half of the country’s electricity and heats about 650,000 homes.

Stop Climate Chaos published its report to coincide with the closing of public consultation on the new National Energy and Climate Plan. The report will form part of SCC’s submission to the consultation. Unlike previous consultations, the plan deals explicitly with both energy security and decarbonisation.