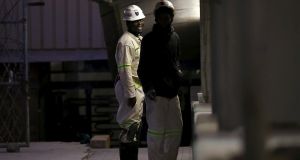 Miners at the end of their night shift at the Leonine mine in Rustenburg, South Africa. Photograph: Reuters

Despite commodity prices falling dramatically between 2011 and 2015, China has remained a dominant investor in African mining, as the continent has enough mineral resources to meet the resource-hungry nation’s development needs, as well as those of other developing Asian economies.

Intarsia Capital chief executive Graeme Robertson told delegates he believed that the US was going to boost its own production of resources, and this development would lead to a restructuring of political alliances internationally. Robertson went on to say that although the US had never had a major influence on African mining investments, many parts of the continent were attractive to Asian companies wanting to invest in the industry.

South Africa and Japan signed a co-operation agreement last week which will enable the two countries to collaborate on exploration and the creation of geoscientific knowledge, reciprocal investments, skills development, environmental issues, research and development, and clean-coal technology.

That China is committed to mining in Africa is apparent from all the deals it is making across the continent. Only last November Chinese state-owned mining company Shandon Iron and Steel revealed it will invest heavily in the sector in Sierra Leone.

In a press statement, Shandon said it intends investing $700 million in an iron ore processing plant in Tonically district, which it had acquired in full in 2015 from Britain’s African Minerals mining company. According to Shandon, all of the iron ore mined at Tonically will be shipped to China.

The aim of last week’s mining event in Cape Town was to provide African leaders with a platform to showcase investment opportunities to foreign miners and investors, and to debate issues that are undermining the sector’s performance.

The mining sector is seen as a key pillar upon which Africa’s economic and social development could be built, but in recent years it has performed poorly due to the fall in commodity prices, political problems, regulatory uncertainty and labour unrest.

However, on the back of prices for iron, copper and tin rising dramatically over 2016, and significant interest from within the global industry in this year’s conference, there was speculation a potential commodities’ boom could spark investment in African mining again.

The World Bank’s latest commodities forecast confirmed that prices are climbing due to strong Chinese demand and low levels of supply. Copper prices jumped 10 per cent in the last quarter of 2016, “the first double-digit quarterly gain in nearly five years”, the report said.

The bank is also projecting metals prices to rise by 11 per cent this year, a significant improvement from an earlier forecast of just 4 per cent.

But outside of the predicted interest from Asian companies, many experts believed that despite the rising prices, the aforementioned deterrents to investment could stop risk-averse Western investors from loosening their purse strings.

Indeed regulatory uncertainty was one of the main topics of discussion among delegates and interested parties last week.

Writing in Business Day newspaper on Tuesday, Peter Leon, the Africa cochairman of international law firm Herbert Smith Fireless traced much of the regulatory uncertainty to a raft of new laws passed by governments in the 1990s and the global economic crash in 2008.

Leon said during that decade up to 30 African countries passed less restrictive and business-friendly laws to boost trade and attract investment, but by the mid-2000s there were concerns that the prosperity generated was only benefiting the investors and not African citizens.

“The 2008-09 global financial crisis intensified these concerns as countries dependent on mineral exports suffered a sudden shortage in revenue and sought to tackle their fiscal deficits and growing populist pressures by extracting higher mineral rents from their biggest investors when the latter could least afford it.

“Many African countries made rash and unpredictable changes to their mining regimes, creating regulatory uncertainty and harming investor confidence,” he maintained.

As South Africa has the most developed mining industry in the continent, the regulatory issues here were of particularly interest to delegates. Especially the proposed amendments to South Africa’s Mineral and Petroleum Resources Development Act – now in a fourth year of legislative limbo – and the mining charter. In relation to the charter, which is designed to redress inequity in the industry created by apartheid, the South African government is proposing that mining companies be 26 per cent owned by black investors, even if those investors later sell their stakes. Companies argue this will lead to continual dilution.

On Monday, the department of mineral resources minister Mosebenzi Zwane said the charter would be gazetted by the end of March and the long-delayed amendments to the Mineral and Petroleum Resources Development Act would be promulgated by the end of June.

“We must remain committed to the principle of shared prosperity and responsible investment in the mining sector. We ask the investment community to seize the opportunity to partner with black people, communities and work meaningfully in their operations,” Zwane said in his welcoming address to delegates. But the industry has pointed to a lack of engagement and consultation around the charter, and has concerns related to how much input of theirs has been taken on board by government.

The South African Chamber of Mines welcomed the minister’s emphasis on “shared prosperity and responsible investment”.

Commenting on the need for the country’s mining legislation to be finalised, Chamber of Mines chief executive Roger Baxter said the mining industry needs “predictable, stable and competitive” mining policy and legislation that is workable and practically achievable.