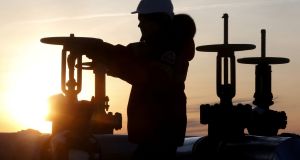 A Russian oil worker outside the Siberian city of Kogalym. There are signs that Russia’s output may be falling but that exports remain high as its producers shield their core export markets at the cost of lower domestic supplies or by cutting into inventories

Oil prices dipped on Monday on signs that global fuel markets remained bloated despite Opec-led crude production cuts that have been more successful than most initially expected.

The Organisation of the Petroleum Exporting Countries (Opec) and other producers including Russia have agreed to cut output by almost 1.8 million barrels per day (bpd) during the first half of this year in a bid to rein in a global fuel supply overhang.

There was scepticism that producers would make the promised cuts, but compliance with the announced reductions is now estimated at around 90 per cent.

“Traders will be keenly awaiting the release today of Opec’s monthly report. If production cuts are coming through as suggested, we should see oil prices push higher,” ANZ bank said on Monday.

While traders said that crude was well supported in the lower to mid-$50s per barrel due to the curbs, they pointed to a host of reasons that were preventing prices from rising further unless production is cut deeper or for a longer period.

In the United States rising drilling activity is pushing up production and undermining Opec’s efforts to reduce output. Drillers added eight oil rigs in the week to February 10th, bringing the total US count to 591, the most since October 2015, Baker Hughes said on Friday.

Underscoring the US fuel glut, traders are preparing to export gasoline from the east coast after months of heavy importing and local production swamped the region.

In Russia, which is participating in the cuts, there are signs that output may be falling but that exports remain high as its producers shield their core export markets at the cost of lower domestic supplies or by cutting into inventories.

Given these trends, analysts say that Opec might have to extend its cuts for a longer period than the currently planned first half of 2017.

Yet since global oil demand is expected to rise by between 1.3 million bpd and 1.5 million bpd in 2017, Opec’s conundrum is that the longer and deeper it cuts, the more it cedes market share to competitors, as seen in the two world’s biggest oil consuming markets.

In the United States, Opec is facing the rising flood of shale-driven production. In China, Opec’s de-facto leader Saudi Arabia has already been overtaken by Russia as the biggest oil supplier. –

1 Lockdown exit: How can Irish economy reopen without big health risks?
2 Property market has not felt full impact of Covid-19, warns Sherry FitzGerald
3 I want to change my will quickly in case I fall ill. Do I need a lawyer?
4 Government announces €1bn in supports for businesses
5 Toast believed to have cut its Dublin staff by 50%
6 German fund closes €93m Harold’s Cross build-to-rent deal
7 Coronavirus: Property rental in the jaws of the epidemic
8 Business Post cuts pay for staff by up to 15%
9 Facing economic meltdown ... and nothing wrong with our economy
10 Ibec chief says 10% jobless rate at year end would be ‘great achievement’
Real news has value SUBSCRIBE