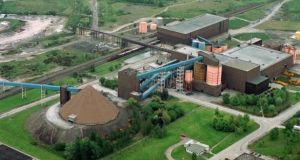 Boliden, the Swedish owner of Tara Mines in Co Meath, is to invest €44 million in the site after identifying new mineral resources and deciding to expand the mine’s tailing dam.

The mine, which is just outside Navan, is Europe’s largest, and the world’s ninth largest zinc mine. It currently employs over 600. Production at Tara Mines began in 1977, and since then more than 80 million tonnes of ore have been mined.

Boliden Mines said a recent exploration has resulted in the discovery of a new mineralisation Tara Deep. An extension of the capacity of the tailings dam, which currently limits Tara’s lifespan, has also been decided.

The new tailings dam will have sufficient capacity for production at current levels until 2026, Boliden said.

The company’s planned investment totals €33 million, and is conditional upon obtaining official permits. The investment is based on mining until at least 2023, although the company said the new mineral resources may lead it to extend the life of the mine further.

“Tara’s exploration work in the last few years has been successful, and the capacity of the tailings dam is now limiting the life of mine to 2020. New exploration successes, increased productivity, and high zinc prices make extending the mine’s lifespan a profitable option, so we have decided to expand the tailings dam with a capacity until 2026,” said Mikael Staffas, president of Boliden.

The new Tara Deep deposit has inferred mineral resources totalling 10 million tonnes with a zinc grade of 8l5 per cent and a lead grade of 1.8 per cent. The mineralisation resembles Tara’s main ore body, but has a more complicated structure and is at a greater depth of between 1,200m and 1,900m, Boliden said.

1 Why is Germany suddenly embracing its inner Keynesian?
2 Passengers face queuing in car parks at Dublin Airport
3 Tesla’s Elon Musk calls for breakup of Amazon in tweet
4 Major credit union plans to limit savings accounts to €40,000
5 Prospect of foreign travel highlights remaining restrictions here
6 Brother is dragging his heels as executor of uncle’s will - is there anything I can do?
7 Ikea among major retailers to reopen next week
8 Domestic economy may get boost from multinationals
9 Inflated GDP data set to cost Ireland in share-out of EU recovery fund
10 Tesco to cut emissions by converting waste food from Irish stores to gas
Real news has value SUBSCRIBE