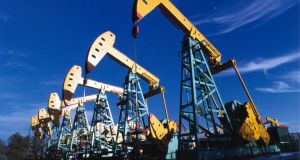 US Oil and Gas has shown itself to be consistently cautious over recoverability Photograph: Reuters

What a difference a year makes. Recent upbeat assessments from explorer US Oil & Gas have shareholders clamouring to increase their investment, according to the company, which is considering funding options.

Shareholders have seen their stake in the business diluted by a series of private placings in recent times. However, an open offer of nearly 11 million shares last March saw just under 16 per cent taken up.

Reporting last month on the performance in the financial year to the end of July last, the Dublin-based company whose major asset is a prospect in Hot Creek Valley in Nevada, said it had raised $1.54 million and had cash and equivalents of roughly €1.1 million at year end. But, even before recommencing drilling, it reported an operational loss of over $800,000, up sharply on the $500,000 loss in 2015.

Since then it has raised a further $415,000 in another private placing. More importantly, it has published data from two separate reports – by Halliburton and Baker Hughes.

According to the company, a large number of shareholders “have contacted the company to express an interest in acquiring further shares”. It says it is considering how best to facilitate this.

This comes against a backdrop whereby US Oil and Gas has shown itself to be consistently cautious, not least in its reference to the “specific difficulties” associated with local geology in Nevada.

When it comes to turning oil into cash, there’s a big difference between contingent resources and proven reserves – to say nothing of actually delivered production.