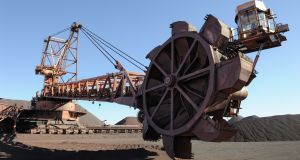 Veteran Australian activist investor Peter Yunghanns has failed in an attempt to remove almost two-thirds of the board of Irish aluminium ore explorer Anglo-African Minerals and become a director himself.

The Melbourne-based businessman, who is in his late 70s, is understood to have built up a 24 per cent stake this year in Anglo-African Minerals by buying stock and exercising an option to convert a $2 million-plus (€1.9 million) loan into equity in the previously Frankfurt-listed company, which is focused on the Republic of Guinea in west Africa.

At an extraordinary general meeting of shareholders on Friday morning in Dublin, some 70 per cent of investors in the company rejected motions put forward by the businessman to remove the company’s chairman, John O’Connor, chief financial officer Martyn Knight and non-executive director Christian West from the board of the Cashel, Co Tipperary-based company.

They also rejected resolutions to appoint Mr Yunghanns and an Australian associate, Sean O’Brien, to the board.

A lawyer representing Mr Yunghanns at the meeting declined when asked by The Irish Times to identify the reasons why the businessman had sought to change the make-up of the board.

The development comes almost three months after Anglo-African Minerals announced a €200 million joint venture with a Chinese consortium to develop its most advanced aluminium ore prospect in Guinea.

The eight-year-old company, which owns four bauxite licenses in the country, plans to co-develop its flagship Forward Africa Resources project located in the Kindea and Dubreka prefectures with China New Era Group and China Geo-Engineering. It is envisaged the project will go into production within the next 18 months.

The joint venture, in which the Chinese partners will have an initial 71 per cent stake, will seek to be listed on the Hong Kong Stock Exchange.

It is believed that Mr Yunghanns agreed to provide a $6 million-plus (€5.7 million) facility to Anglo-African Minerals during the summer, but only about a third of it was actually drawn down.

A lawyer by background, Mr Yunghanns has taken stakes in several Australian companies over the decades, and has earned the reputation of being a “corporate raider” over his investment style and battles with some of the firms in which he has invested. A decade and a half ago, he was involved in a legal battle with his own adult children over family wine estates in southern Australia.