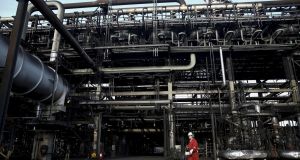 Hedge funds have amassed the biggest ever bet on rising oil prices as investors back Opec’s supply cuts to tighten the crude market and seek protection against fears of inflation.

Data from regulators and exchanges showed speculators have built long positions equivalent to almost 1bn barrels of crude across the major contracts, while short positions amount to just 111m barrels.

This one-sided bet has left speculative investors holding a record net long position - the difference between bets on rising and falling prices - in global benchmark Brent crude and US marker West Texas Intermediate futures and options contracts equivalent to 885m barrels by January 31.

That massive paper position is equal to just over nine days of global oil demand, and has prompted some traders to express concern prices could fall if funds move to take profits by selling positions en masse.

But the record oil bet, which investors have increased while prices have held relatively steady since the start of the year, could also point to the involvement of large macro funds. These sometimes trade oil as a hedge against moves in other markets.

Markets are also focused on the impact of policies under US president Donald Trump as Opec producers and allies such as Russia have cut oil output as part of a deal to curb supplies and raise prices.

His plans for lower taxes, deregulation and increased infrastructure spending has fostered confidence in US economic growth, but also stoked concerns about inflation - which sometimes leads fund to buy oil as protection against rising costs.

Richard Robinson, of the Global Energy Fund at Ashburton Investments, said “energy is probably the only commodity which gives you a real hedge against unexpected inflation”.

He said an attraction for European investors concerned about inflation is that oil futures are widely traded and provide portfolios with exposure to both the potential for higher commodity prices and a stronger dollar.

Still, other investors see reasons more directly linked to oil’s output behind the surge in crude buying by funds.

Opec’s production cuts have been led by the group’s largest producer and de facto leader Saudi Arabia. Exports data shows steep curbs have been enacted, supporting the view oil markets will come back into balance this year, despite a rebound in drilling by US shale companies.

“We see inventories going down a lot in the coming months and prices are not high enough to prompt more investment,” said one hedge fund manager. “Our question is why are prices not higher.”

Opec’s global supply pact lifted prices more than 22 per cent between the November 30 meeting and January 1 to $55 a barrel, but gains have since slowed. Traders are closely watching the shape of the oil futures price curve, as it indicates the market could be tightening even as spot prices are relatively stable.

1 Lockdown exit: How can Irish economy reopen without big health risks?
2 Amazon fly dedicated aircraft into Belfast to fill online orders
3 Bank puts business owner on hold for month on Covid finance
4 Why we should be slow to use tracking apps in coronavirus response
5 Government measures will ‘significantly’ support incomes, ESRI says
6 Deliveroo branches into grocery deliveries in Ireland
7 Government announces €1bn in supports for businesses
8 Coronavirus: The online scams, apps and trends you need to know about during the pandemic
9 Finance ministers gather as fears grow for euro zone
10 I want to change my will quickly in case I fall ill. Do I need a lawyer?
Real news has value SUBSCRIBE