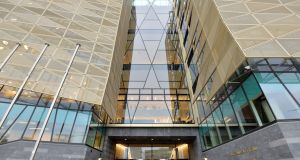 The Central Bank has warned all parties against adding further spending fuel to an economy that is already running at full capacity. Photograph: Alan Betson/The Irish Times

As political parties look to deliver on campaign promises and put together a governing coalition, the Central Bank warns all parties against adding further spending fuel to an economy that is already running at full capacity. Barry O’Halloran has the bank’s quarterly economic commentary.

Meanwhile, Sinn Féin finance spokesman Pearse Doherty reaffirmed his party’s priority to force the banks to pay taxes and to close property loopholes , just as the markets closed on another volatile day for stocks in both sectors. Jack Horgan-Jones and Mark Paul report.

In his column, Ciarán Hancock writes that while there was plenty of muttering among business leaders before the election about how awful it would be to have Sinn Féin in power – and there are reasons for investors to be concerned about Sinn Féin’s fiscal policies – realism and pragmatism has quickly set in since the votes were counted.

Also getting its oar in early is AIB, which has published a report calling for the introduction of a widespread programme of shared ownership or equity loans to allow more people buy houses. And while the bank repeatedly warns of the need to stay in line with Central Bank mortgage lending rules. it seems any general shared ownership programme would struggle to do so.

For its part, somewhat tongue-in-cheek, ratings agency Standard & Poor’s noted that the general election was likely to lead to a “more relaxed” budgetary stance with greater public spending though, as Colin reports, it said that, for now, it should not affect the State’s suitability for investment.

Businessman Harry Crosbie has pulled the plug on the family haulage business after four generations after a row with Dublin Port that saw it lose it dockside base. Ciarán Hancock has the details.

Ciara O’Brien throws an eye over Samsung’s new Galaxy S20 range, promised speed and a top notch camera - alongside a top notch price – as it does battle for users with Apple and Huawei.

Figures form the CSO show that home completions hit a 10-year high last year. Colin Gleeson reports that they were up almost 60 per cent on the previous year but still well shy of the level required.

Commercial property editor Ronald Quinlan looks at the ambitious plans for five of the big technology players in Dublin and what that will means for their staff and the property market.

US-based Exeter Property Group has acquired the student residences at the National College of Ireland (NCI) in Dublin’s IFSC for a sum thought to be in the region of € 35.5 million from the man who developed Dublin’s Jervis Centre with Paddy McKillen, writes Aidan Murphy.

Finally, hostels aren’t what they used to be, as one of Dublin’s biggest and busiest, the Jacobs Inn hostel, has been sold to a pan-European investment partnership for around €30 million. Ronald has the details.