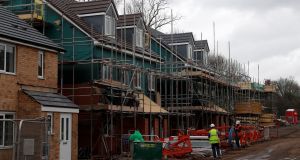 One of Ireland’s biggest banks has called for the introduction of a shared ownership scheme to make home ownership more affordable. Photograph: Darren Staples/Reuters

One of Ireland’s biggest banks has called for the introduction of a shared ownership scheme to make home ownership more affordable.

AIB says the introduction of a shared ownership or loan equity scheme would help a key segment of the market – people who earn too much to qualify for social housing but not enough to get a sufficient mortgage to buy their own home.

The proposal chimes with Fianna Fáil policy as outlined last November by party leader Micheál Martin, who promised to establish a shared ownership scheme alongside a rent freeze, the easing of Central Bank rules, a new SSIA-type scheme to build mortgage deposits and an affordable housing scheme.

AIB says it is the primary source of funding for residential developments currently being built. These will deliver 8,200 homes eventually, including more than 800 social housing units, the bank said.

Donall O’Shea, head of real estate finance at AIB, said the bank believes there are a large number of households on average incomes that “could potentially afford home ownership but are constrained from doing so”.

“There is merit in considering the introduction of schemes such as shared ownership or shared equity schemes in the Irish market that targets the affordability segment,” he said. However, he acknowledged that it would require careful consideration to ensure it did not breach Central Bank mortgage macro-prudential rules.

The report acknowledges that the Government has recently brought in an affordable purchase scheme in co-operation with local authorities but proposes a similar programme for the wider market.

AIB’s head of real estate research, Pat O’Sullivan, said increased supply has played a part in reducing the rate of residential price inflation outside of Dublin but that it had had little impact in Dublin.

“We believe Dublin remains sharply under-supplied,” he said, “and that the reasons property prices have moderated in Dublin are largely attributable to affordability issues”.

The AIB paper finds affordability constraints and the macroprudential mortgage rules have contributed to the slowdown in residential property prices, particularly in the Dublin market.

“It is our view that affordability constraints and the loan-to-income rules are the primary causes of the slowdown in residential property prices, particularly in the Dublin market,” authors Mr O’Sullivan and Rory McGuckin, the bank’s real estate economist, say.

The bank’s chief executive, Colin Hunt, last year became the first boss of a lender to publicly question the continued enforcement by the Central Bank of mortgage lending rules, arguing that the time had come to relax the restrictions.

He said he believed the lending rules had served their purpose but should now be adjusted to reflect a market where slowing and, in some places, negative growth rates were having a “negative confidence impact”.

“Ultimately there remains a large gap between supply and demand,” said Mr O’Sullivan.

In the rental market, the AIB report finds that it is a combination of affordability issues and regulatory constraints rather than any marked increase in the supply of rental stock which have now started to restrain the increase in rental inflation.