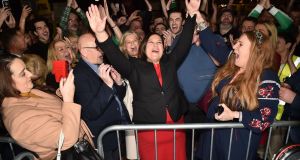 According to the Central Bank of Ireland’s latest quarterly commentary on the health of the Irish economy, underlying investment activity by domestic companies last year was “subdued”.

The reasons for the deferral of some investment decisions are not explicitly laid out, but we can assume that uncertainty around the outcome of Brexit played a major role, particularly among those exporting to the UK.

Imagine then the potential impact on investment decisions created by the imperfect result thrown up by the general election. Sinn Féin won the popular vote, but has broadly the same number of seats as Fianna Fáil and Fine Gael.

It’s a scenario that will make the formation of a new government extremely difficult, with at least one of the parties having to swallow hard on a compromise coalition arrangement if we are to avoid another election.

In 2016, it took 70 days to form a new government. No one knows how long it will take this time around.

The talks are slightly more complicated as Sinn Féin will be a key player in any negotiations, a party that neither Fianna Fáil nor Fine Gael wanted to do business with prior to this election because of its left-leaning economic policies, and legacy issues relating to the Troubles.

The response to this uncertainty was swift. Irish banking and property stocks took a battering (AIB and Bank of Ireland had €346 million wiped off their value yesterday alone) as investors took fright at talk of rent freezes and extra taxes on banks and the wealthy (all Sinn Féin proposals).

One property developer, who is in the middle to trying to piece together a debt refinancing, told me that their main investor (who is overseas) is already asking questions about the impact of the election result on the property market here.

There are reasons for investors to be concerned about Sinn Féin’s fiscal policies. The party has promised an increase in spending of €21 billion at a time when the other big parties were talking about a fiscal space of about €11 billion over the course of the next five years.

It has proposed to freeze rents for three years, which could push some landlords and foreign money out of the market, and wants one quarter of all private developments set aside for social housing.

It also wants to scrap the Special Assignee Relief Programme which offers tax relief for people who are assigned to work in Ireland from abroad. This relief was extended out to the end of 2022 in the last budget, with the IDA arguing for its retention on the basis that it helps us “remain competitive” when seeking foreign investment and to retain employment.

In terms of the banks, it is proposing to give the Central Bank powers to cap mortgage interest rates, something the regulator is not seeking. And it would “end the corporation tax break” for bailed out lenders, meaning they wouldn’t be able to offset past losses against future profits. This measure would raise €175 million, according to Sinn Féin.

It would also keep AIB in majority State ownership, and it plans to target the so-called vulture funds.

But it’s also worth noting that Sinn Féin plans to “protect funding” for the IDA while increasing investment for other such State agencies. And it supports our headline 12.5 per cent corporation tax rate.

In addition, it has proposed a range of measures to support SMEs, and a package of insurance reforms to protect businesses against “extortionate premiums”.

A number of leading figures in the business community are sanguine about the prospect of Sinn Féin in government. Ibec chief executive Danny McCoy told The Irish Times that businesses would “absolutely” be able to work with Sinn Féin. “We have seen them in action in the North. Their instincts are not that mad when it comes to business.”

Developer Johnny Ronan, an arch capitalist who successfully navigated the business waters in communist China for many years with Treasury Holdings, said many of Sinn Féin’s proposals were “sensible stuff”, adding that Sinn Féin recognises the benefits of foreign direct investment here. Ronan does a lot of building work here for big tech companies.

Brian Hayes, a former Fine Gael TD who is now head of the Banking and Payments Federation Ireland, said “people need to be relaxed about this”, adding that Sinn Féin would have to agree a programme for government with its coalition partners. This would likely water down many of the economic measures proposed in its manifesto.

There was plenty of muttering among business leaders before the election about how awful it would be to have Sinn Féin in power, but realism and pragmatism has quickly set in since the votes were counted.

Businesses make adjustments to their external environment all the time, and are past masters at reinventing themselves.

Most of the State’s biggest property developers ended up in Nama post the 2008 economic crash. The savvy ones gritted their teeth, served their time, and came out the other end chastened but back in business. They are now building most of the offices and homes under construction around the country.

By comparison to the fallout from the crash, living with Mary Lou in government would be a walk in the park.