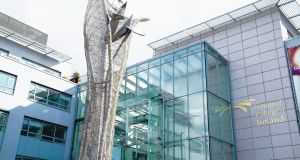 US-based Exeter Property Group has acquired the student residences at the National College of Ireland (NCI) in Dublin’s IFSC for a sum believed to be € 35.6 million.

When the residences were developed it is understood that NCI had a call option to purchase them 10 years after completion of the development, or by September 2013 at the latest, for € 24.9 million. NCI did not exercise the option and Northern Ireland property developer Padraig Drayne subsequently acquired control of the scheme. Mr Drayne is best known in Ireland for his business partnership with investor Paddy McKillen, including the development of Dublin’s Jervis Street shopping centre.

An entry in the property price register suggests € 35.6 million was paid in total by Exeter Property Group in November 2019. Assuming this represents the entire consideration paid, Adrasta Commercial has more than doubled its money given its 95 per cent share of the sales proceeds would amount to € 33.82 million while it is understood the company paid just under € 15.2 million for its interest. The 53 apartments in the scheme are understood to comprise 286 bedrooms, each with en-suite bathrooms, and on this basis the recent deal breaks back at roughly € 124,475 per bedroom.

The student residences were originally developed by the Origin 8 partnership, comprising defunct builder Pierse Contracting, the family of developer Paddy Kelly and the McCormack family, who head Alanis Capital.

In 2014 Exeter Property Group began acquiring Irish properties, including a large number of industrial properties spread across various industrial estates in Dublin and its environs. In 2018, the company reportedly acquired the Cúirt Na Coiribe student accommodation scheme in Galway for € 35 million.

The company did not respond to a request for comment regarding the NCI student residences transaction.