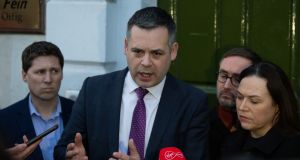 Sinn Féin’s finance spokesman Pearse Doherty reaffirmed his party’s commitment to a radical shakeup of business and tax policy on Tuesday after banks and publicly listed homebuilders saw hundreds of millions of euros wiped off their values in a post-election rout.

More than €346 million was wiped off the stock market value of Ireland’s two biggest banks on Tuesday though most housebuilders recovered some ground after two days of volatile trading.

The slide in the banks’ market cap comes in the wake of the success of Sinn Féin in the general election and the strong possibility that the party will be part of the next government.

“We’re very clear that we have to end the tax loopholes for some of the property funds and that’s some of the companies that are making the headlines today,” Mr Doherty said. “ Vulture funds have to start paying their taxes.”

In its election manifesto, Sinn Féin said it would order the Central Bank to cap mortgage interest rates. It also said it would stop banks from offsetting historical crash-era losses against future profits to reduce their tax bills.

“Banks who are making billions of euros of profit need to start paying their taxes,” Mr Doherty confirmed on Tuesday after markets had closed.

“This is some of the change that people have voted for and this is what Sinn Féin want to bring about if we can get agreement with other parties to form a government.”

Listed property companies had taken a further battering earlier on Tuesday before recovering some lost ground later in the day.

By the end of the session, all were back in the black – at least on Tuesday’s trade – with the exception of house builder Glenveagh, which fell a further 2.3 per cent after shedding almost 11 per cent on Monday.

Hibernia Reit finished up 0.8 per cent, having lost 6.98 per cent the previous day. IRES, Ireland’s largest landlord which has surrendered 8.65 per cent in the wake of the election, recovered by 0.5 per cent on Tuesday.

Housebuilder Cairn Homes fared best, rebounding 3.5 per cent after giving up 8.62 per cent in the previous session. All had been in the red earlier in Tuesday trading.

Although a negative response was seen in banking stocks, the overall Iseq all-share index rebounded by 1.3 per cent on Tuesday, having tumbled the previous day.

Sinn Féin’s capture of almost a quarter of the popular vote raises the possibility that it will be in a position to freeze rents and embark on a public house-building programme if it joins a coalition.

Business leaders who spoke to The Irish Times on Monday indicated no difficulty developing a working partnership with the party. The boss of the bank lobby group the Banking and Payments Federation Ireland, Brian Hayes, said: “People need to be relaxed about this”.

Goodbody analyst Dermot O’Leary wrote on Tuesday that “we are a long way from getting clarity on the make-up of the next government in Ireland”.