Number of completed homes last year is highest in a decade 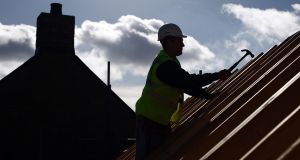 During the final quarter of 2019, more than four out of five new dwelling completions were in urban areas.

The number of completed homes reached its highest in a decade in the Republic last year, with the number of apartments jumping almost 60 per cent compared with the year before, figures from the Central Statistics Office show.

Overall, 6,450 new homes were completed during the final quarter of the year, compared with 5,445 completions during the same period the year before. That equates to an increase of 18.5 per cent.

However, the figure still falls well short of the 34,000 new homes that the Central Bank estimates are required each year between now and 2030 in order to meet demand.

Homelessness was a key issue during the general election, with the latest data from Department of Housing showing there were 9,713 people in emergency accommodation during the week of December 23rd-29th.

Goodbody economist Dermot O’Leary said the pre-election housing targets of all parties “look very ambitious” in the context of the capacity shortages already being seen in the industry.

“All tenor types – social, private rented and privately owned – are required,” he said. “Some party pledges risk crowding out the private sector.”

In the final quarter of 2019, as well as the year as a whole, the biggest relative growth was in apartments.

The number of apartments completed in the final quarter of last year rose 72.2 per from 726 in 2018 to 1,250 in the same period last year. Of these, more than two-thirds were in Dublin.

Mr O’Leary said about 80 per cent of these units were purchased by investors in the private rental sector.

“There is also a significant amount of apartments in the planning and development process that will depend on the ongoing buoyancy of the private rental sector,” he said.

“This would be put under threat if some of the policy proposals of Sinn Féin were to be implemented if they were to find their way into power.”

During the final quarter of 2019, more than four out of five new home completions were in urban areas.

The number was highest in Dublin at 2,086, followed by 1,554 in the mid-east. Together, these regions made up 56.4 per cent of all new home completions in the quarter.

The next highest region was the southwest, where there were 887 completions.

The west was the region with the highest relative year-on-year increase, growing 63.9 per cent from 346 completions in the final quarter of 2018 to 567 in the same period last year.

The Eircode area with the most new home completions in the whole of last year was Naas (829) followed by Dublin 15 (741).

The rest of the top 10 Eircode areas were all in the Dublin suburbs and commuter belt apart from Galway (613) and Limerick (559). Those areas accounted for three out of 10 of all new home completions in 2019.

The statistics also show that the average new home size fell by 6.1 per cent in 2019.

The CSO said the decline was due to an increase in the proportion of completed apartments and a decrease in the size of single and scheme dwellings.