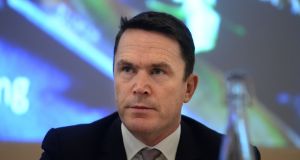 Mr Tonge will succeed Humphrey Singer, who stepped down in September. Several other key executives have departed as chief executive Steve Rowe tries to turn around M&S.

Greencore said Mr Tonge will step down as an executive director and CFO following the publication of group’s interim results in May 2020.

The Irish company’s chief executive Patrick Coveney said Mr Tonge had been a “dedicated, professional and loyal Greencore colleague” over the past 14 years.

“He leaves with our gratitude for his enormous contribution to the group but he also has our very best wishes for the future. We have a strong finance team at Greencore and have already commenced a process to appoint a new chief financial officer.”

Mr Tonge said: “I am delighted to be taking on a new and exciting challenge with Marks & Spencer, a key customer of Greencore’s. I believe Greencore to be in great shape, with a clear, compelling strategy for future growth and a strong leadership team to deliver it.”

The storied British retailer has been shutting stores as its clothing business keeps losing ground, with the grocery arm performing better. The shares have fallen 34 per cent over the past 12 months.

An interim financial chief, David Surdeau, who stepped in when Singer departed, will continue in that role until Tonge joins M&S in June.