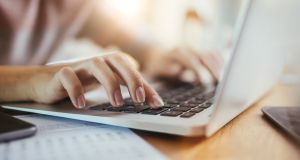 Irish Ambassador to France Patricia O’Brien hosted a seminar in Paris on “how women are redefining the codes” in business on Friday morning.

“We are celebrating St Brigid’s Day, not Brexit Day . . . It may seem strange that in an increasingly secular society, we are associating the business world with a fifth-century saint,” Ms O’Brien said. St Brigid was “an independent woman and a trailblazer,” she explained.

The need for mentoring and female role models were recurring themes. Laura Dagg, the embassy’s economic and trade officer, recalled the childhood thrill of hearing then president Mary Robinson address “Mná na hÉireann” at her inauguration 30 years ago.

EI has tried to understand what is holding women back.

“There isn’t one single issue that would solve it,” Ms Daly said.

About 80 per cent of women study the humanities or social sciences while only 20 per cent opt for science or engineering.

“We need to change things now,” said Orla Noonan, chairman of the board of directors of the Scandinavian digital marketplace Adevinta. “If we wait for the drift-down effect of all these good intentions, it’s not going to change quickly enough.”

Ms Noonan, daughter of former finance minister Michael Noonan, said gatherings such as the St Brigid’s Day event were crucial because “a lot of women can feel isolated” in business. “You need to create informal networks for them.” She is active in PFPM, a group of women media executives which recently drew up a charter on harassment issues.

Participants agreed that affordable childcare and understanding partners or spouses are essential for women to succeed in business.

A male member of the audience who had worked in the pharmaceutical industry noted that “the first wobble in a woman’s career is often after the first pregnancy, especially for jobs that require foreign travel”.

Ms Noonan said women often feel guilt and exhaustion on returning to work after maternity leave. “It’s a critical time . . . when women have to be very encouraging to women,” she said. “I have often seen the opposite effect among men who become fathers for the first time. They stop larking around. They’re in asking for a raise. The hunter and gatherer is back.”

By contrast, “Women coming into organisations ask for salary rises for the first five years, then they stop. Why does their behaviour change?” Ms Noonan asked.

1 Stripe moves payment processing to Dublin due to Brexit
2 Over 60% of mortgage holders miss chance to save €10,000
3 Dublin Airport says pre-flight Covid tests possible ‘within days’
4 Developers fail to stop receiver selling €60m Dublin City Quay property
5 How long can Government afford to keep State pension age at 66?
6 Apple iPhone 12 Pro: Well worth the wait
7 Media critical to Ireland’s democracy, says Taoiseach
8 PTSB’s €1.4bn sale is a sign it is preparing for a fresh loans crisis
9 Revenue accused of harassing businesses over Covid wage subsidy scheme
10 How much state pension will I get next year?
Real news has value SUBSCRIBE