Ireland has the fifth-largest number of billionaires per capita in the world, Oxfam says 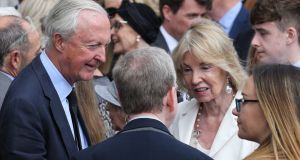 Ireland has the fifth-largest number of billionaires per capita in the world, according to an Oxfam report published ahead of the World Economic Forum conference in the Swiss resort of Davos this week.

There are now 17 Irish billionaires – the vast majority of whom are men – but who exactly are they?

1 Hilary, Alannah and Galen Jr Weston and family: €11.93 billion (Up €512 million)
At the top of the table are the Westons, who run a transatlantic retail empire from Europe to Canada, which includes businesses such as Penneys, Brown Thomas, Selfridges and Fortnum & Mason. They also own Associated British Foods, which itself owns the clothing chain Primark/Penneys.

2 Patrick and John Collison: €5 billion (Up €2.6 billion)
The Limerick-born Collison brothers established their online payments company Stripe in 2010. Stripe handles billions of dollars in transactions each year and counts the likes of Amazon, Uber, Booking.com, Deliveroo and Google among its customers.

3 John Dorrance: €2.6 billion (No change)
Dorrance is the American-born grandson of the creator of the formula for Campbell’s condensed soup. He moved to Ireland in the mid-1990s.

4 Larry, Kitty, Laurence and Mark Goodman: €2.46 billion (Up €1.82 billion)
Larry Goodman is chiefly involved in the beef-processing industry. He is the sixth generation of a livestock and meat-exporting family and founded what is now ABP Food Group in 1954. He also has interests in the Galway Clinic, Blackrock Clinic and Hermitage Clinic in Dublin.

5 Dermot Desmond: €2.02 billion (Down €40 million)
Desmond founded National City Brokers in Dublin in 1981, which was sold to Ulster Bank in 1994 for a reported £39 million. He has investments in a broad range of companies and entities including Celtic Football Club.

6 Denis O’Brien: €2 billion (Down €1.8 billion)
The foundation of O’Brien’s fortune was the Esat consortium, which was awarded the State’s second mobile phone licence in 1996. The Moriarty Tribunal subsequently found O’Brien made payments to government minister Michael Lowry who “delivered” the licence for O’Brien.

Today, his main business is in telecommunications with Digicel, which operates in 31 markets, mostly in the Caribbean, Central America and the Pacific islands.

7 Lady Ballyedmond and family: €1.86 billion (Up €11 million)
The family’s wealth is largely based on Newry’s Norbrook Laboratories, which was founded in 1969 by the late Eddie Haughey. The company is considered one of the world’s leading veterinary pharmaceutical businesses.

8 The Dunne and Heffernan families: €1.78 billion (Up €21 million)
Margaret Heffernan has been at the helm of Dunnes Stores since 1992. The Dunne family has a rich history in Irish retail that started in 1944 on Cork’s Patrick’s Street. The store is now one of the country’s major retail outlets.

9 John Magnier and family: €1.72 billion
Magnier is an Irish business magnate and one of Ireland’s leading thoroughbred stud owners. He has extensive business interests outside the horse-breeding industry. A high-profile venture was his stake of 28.89 per cent shareholding in Manchester United, which was sold in May 2005 to Malcolm Glazer.

10 Deirdre and Mark Lyons: €1.7 billion (No change)
Deirdre Lyons co-founded American company Alltech with her husband, Pearse, in 1980 to help farmers with nutritional innovation. Today, Alltech is a $2 billion company, with more than 5,000 employees supporting its business presence in over 120 countries.

The 68-year-old Swiss-based tax resident conducts the bulk of his operations from Geneva. He owns the five-star Adare Manor golf resort, and often invests alongside John Magnier. Both have stakes in UK-based Barchester Healthcare and Britain’s largest pub company, Mitchells & Butlers.

Eugene Murtagh founded building materials manufacturer Kingspan Group, which primarily sells insulation products for commercial and industrial projects. Kingspan has grown through acquisitions and has 100 manufacturing facilities in some 70 countries.

Murtagh, chairman of Kingspan’s board, stepped down as CEO in 2005, passing the baton to his son Gene.

14 Martin Naughton and family: €1.4 billion (Down €35 million)
Radiator tycoon Martin Naughton, who, with his family donated €25 million to a new institute at Trinity College Dublin, made his name as one of Ireland’s foremost industrialists.

He has also become one of the State’s most generous philanthropists. Almost all of his wealth was earned from Glen Dimplex, the heating and electrical goods giant he founded in 1973.

15 The Earl of Iveagh and the Guinness family: €1.11 billion (Up €58 million)
Arthur Guinness founded Guinness Breweries in 1759, having bought a 900-year lease on St James’ Gate brewery in Dublin. The business was subsequently floated on the stock market, raising £6 million at the time.

He bought a stake in the Irish Glass Bottle Company in 1998 and transformed it into Ardagh Group, which is a glass and metal containers giant. Ardagh raised about $319 million (€295 million) in net proceeds from an initial public offering on the New York Stock Exchange in 2017.

17 Luke and Brian Comer: €1 billion (Up €91 million)
The Comers are property developers, and the founders and owners of the Comer Group, which is a privately owned UK property development company.

The company has substantial development and investment interests in a number of market sectors, including luxury residential homes, office parks, retail parks, hotels and leisure facilities.