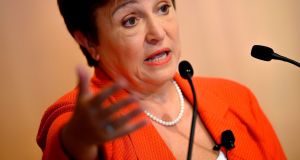 In its latest World Economic Outlook report, the fund cut its growth forecast for the world economy to 3.3 per cent in 2020 and 3.4 per cent for 2021.

However, on a more upbeat note, it said a US-China trade deal and “diminished fears of a no-deal Brexit” were further signs that trade and manufacturing activity may soon “bottom out”.

The more positive outlook was also aided by a shift toward more accommodative monetary policy in several countries.

“While the baseline growth projection is weaker, developments since the fall of 2019 point to a set of risks to global activity that is less tilted to the downside,” the Washington-based fund said.

“These early signs of stabilisation could persist and eventually reinforce the link between still-resilient consumer spending and improved business spending,” it said.

The IMF has cited uncertainty over tariffs and its negative effects on business investment as the biggest factor in limiting growth. “However, few signs of turning points are yet visible in global macroeconomic data,” it said.

The fund’s cautious outlook assumes that there are no additional flare-ups in US-China trade tensions, and that Britain executes an orderly exit from the EU later this month.

Although downside risks had diminished in the wake of the US-China trade deal, the IMF said they were still considerable.

The report and its more upbeat tone comes despite a warning last week from the new head of the IMF Kristalina Georgieva that the global economy risks a return of the Great Depression, driven by inequality and financial sector instability.

Speaking at the Peterson Institute of International Economics in Washington, Ms Georgieva said new IMF research, which compares the current economy to the “roaring 1920s” that culminated in the great market crash of 1929, revealed that a similar trend was already under way.

1 Eason has acquired rival Dubray Books for undisclosed sum
2 Solar panels: Are they worth the investment?
3 Bank leaked my loan request to family who tried to rip me off
4 Longview seeks permission for 753 homes in Cork’s outskirts
5 When the Chemistry no longer works – the closing of a leading Irish ad agency
6 Ryanair and Aer Lingus monitor impact of coronavirus on travel to Italy
7 Stock markets have steadied after Monday’s dramatic falls
8 Revolut valued at $5.5bn after latest fundraising
9 Can I see my father’s previous wills?
10 Up to 5,000 engineering jobs expected to be created in 2020
Real news has value SUBSCRIBE