Sometimes we have to go with our instincts, while owning up to how unreliable they are 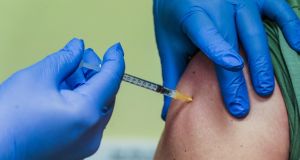 The more Covid-19 cases, the greater the potential payoff from pursuing a one-dose regime but there are obviously risks involved. Photograph: Tino Romano/EPA

Lots of smart people think we are experiencing another stock market mania. Prominent investor Jeremy Grantham says the market is in a “fully fledged epic bubble”. He thinks the euphoria in stock prices is comparable to the South Sea bubble, the 1929 crash and the dot.com catastrophe at the end of the last century.

He seems sure we are in for a lot of equity market trouble. He could be right, but lots of other experts disagree.

Investing in the stock market is often described as gambling. If you are not prepared to do hard analytical work, it is little more than speculation (or you are doing something illegal). It’s also true that an important variable is time: anyone who is not prepared to put their cash to work for many years is relying heavily on luck. Indeed, given the risks involved in both speculating and proper investing, luck is always a key ingredient of success.

Investing means confronting radical uncertainty. But there is too much pretence to certainty. Too many precise answers when the only reasonable statement is: “I don’t know, but here is an informed a judgement as possible – which could be utterly wrong.”

The less analytical you are and/or the shorter your time horizon, the more you should think of yourself as a gambler. Most professionals deride amateur traders.

Not everyone has the luxury of an army of analysts or the necessary time. Old hands look down on neophytes who make decisions using simple rules of thumb. I wonder if the sneering is overdone: so much of investing is random. I’ve often thought that many an investment “process” is a more-or-less sophisticated roll of a dice. And some (but by no means all) of that sophistication is designed to make the whole thing look more scientific – deterministic – than it really is.

There is no unique, universally agreed way of guaranteeing a successful investment outcome. Often, we can’t even agree what success is. The questions are endless and difficult to answer.

Humility and honesty are essential. Too many lay claim to knowledge about an unpredictable future. We don’t know much about why things happened in the past – or even today – let alone what is going to happen tomorrow. To hide that uncertainty, numbers, graphs and charts are chucked around with gay abandon and little statistical coherence. Anecdotes are cited as if they are data; stories and hearsay used in ways that no courtroom would ever allow.

Confusion rather than clarity is the result. Correlation is described, causation improperly inferred. Remind you of anything?

Those who acknowledge the uncertainties are often the same people who do the hard analytical yards and know that the best way to tilt the odds in their favour is simply to be more patient than everyone else. Grantham epitomises this professional approach. Even so, he, like many others, has often been wrong.

The investment debate reminds me of the controversies over Covid-19. Politicians who claim to be “following the science” are failing the (intellectual) honesty test: there is sometimes no such thing as an agreed science.

Prominent scientists have derided those countries which have decided to go with an initial one-dose vaccination strategy. That’s because trials have provided data about two doses.

Of course, the criticism could be entirely appropriate. But this line of thinking reminds me of the certainty of the investment professionals who become convinced that because a particular strategy worked in the past, it will not only work in the future, it is the only one to follow. Experts expressing certainty, when certainty is unattainable.

Proper investing involves deploying as much science and time as possible. But when you don’t have the necessary time, or the science is far from complete, you still have to make a decision. An informed decision, but one that will involve risks.

Whatever you do – even nothing – is risky. Intellectual honesty also involves an acknowledgment that we often can’t put a number – a precise probability – on the risks we are taking. That’s often the nature of risk. We then have only rules of thumb to fall back on.

The more Covid-19 cases there are, the greater the potential payoff from pursuing a one-dose regime. Whether we go with one or two doses involves risk. Scientists can inform us about that risk. But precise quantification is impossible. Sometimes, in the face of extreme uncertainty, we just have to go with our instincts, while fully owning up to how unreliable they are. When one scientist says yes, the other says no, how do we decide?

The chief medical officers of England, Scotland, Wales and Northern Ireland think the risks implicit in a temporary one-dose vaccine regime are worth taking. Other scientists, but not all, agree. One example of the absence of “the” science. Opposing views, honestly held. Decision-making under this kind of uncertainty prompted Napoleon to ask for lucky generals.

Proponents of one dose think it will save lives. It could bring forward economic reopening. Business will recognise a form of supply chain management in the face of initial supply tightness: everybody gets a second dose eventually, but more people are vaccinated earlier. Lives saved, hospitals emptier earlier than they would be otherwise.

Risks can and do backfire but sometimes there is little choice but to take them.