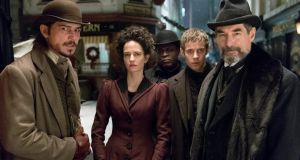 Greystones Media Campus (GMC) Ltd is planning to build “a state of the art” film studio and media campus on a 50-acre site in Greystones, in a scheme that will create more than 1,500 jobs.

The project is a 50/50 joint venture between construction group John Sisk & Son Ltd and and ISIF, a State agency that operates under the umbrella of the National Treasury Management Agency.

Ardmore Studios and Ashford Studios have already put Co Wicklow at the centre of the Irish movie and TV industry, with productions including Braveheart, The Tudors, Penny Dreadful and Vikings shot there.

The promoters of the venture say GMC will capitalise on the growing demand for content by streaming services Amazon, Netflix and Hulu, and more established operators such as HBO and Disney.

A letter lodged with the planning application for the project claims there is currently an acute global shortage of studio space to meet the growing demands of those engaged in the “content creation race”.

The application states that the project when complete will more than double the stage capacity available to film, TV and media crews in Ireland, and generate €1.54 billion for the region.

The scheme involves the construction of 73,511sq m of film studio across 15 buildings at the IDA Business and Technology Park in Greystones.

A central motivation for ISIF’s involvement “is that the development of this studio will support the broader film and TV industry and in particular the existing Irish studio infrastructure across Ireland but specifically in Co Wicklow, where a globally recognised cluster will be created”, the letter says.

ISIF has identified the Greystones project “as strategically important to address the shortage of capacity and promote Ireland as a location for foreign and domestic producers”.

ISIF involvement underlines the project’s economic rationale and its national importance, the application adds. “This development can . . . embed and anchor a global industry in Ireland and Wicklow for the long term.”

A number of local residents expressed concern over the impact of the plan and third parties have the option of appealing the council decision to An Bord Pleanála.