Can we draw a final line under the sorry mess that was Brexit? Fat chance

Chris Johns: Free trade agreement was completed in record time, but it’s far from over 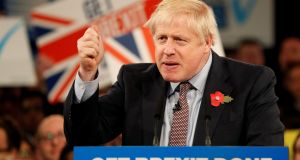 In saying that the deal contains ‘no non-tariff barriers’, Johnson revealed, again, that he hasn’t bothered reading what he has signed. Photograph: Adrian Dennis/AFP

They think it’s all over. A free trade agreement completed in record time; one that is more comprehensive than any other conducted in the EU’s history. Lines in the sand have been crossed and hope is now fervently expressed that one final line can now be drawn under the whole sorry business. Fat chance.

The agreement contains multiple pages that outline how committees and talking shops are to be convened to put the two sides into a state of permanent negotiation that will echo how the EU deals with Switzerland. Swiss diplomats describe it in terms of cruel and unusual punishment akin to ongoing torture. Jobs aplenty for those who enjoy this kind of thing.

The UK claimed that it wanted a “Canada-style” treaty and it has got something close to that - in some respects better than that. All along, Brexit involved wordplay and catchphrases that didn’t stand up to scrutiny. All that “take back control” guff revealed was superficial thinking of an extraordinary kind. That Canada soundbite is one example.

The relationship between the US and Canada offers a template for what will happen next: a dominant power that periodically delivers an economic kicking to its smaller neighbour. The free trade agreement between the two countries was recently redrawn at the behest of the US, with Canada basically having to lay down in front of the US juggernaut. Free trade notwithstanding, any time I have observed the US-Canada border it involves lots of checks and queues. Size equals power and its brutal exercise. Geo-politics has become a battle between economic powerhouses, massive trading blocs, with the UK now alone.

Size matters; size equals power. Ponder this: as part of the EU, Ireland now has more power than the UK.

Hard-line Brexiteers got most of what they wanted. But even if they had achieved all of their aims - basically, “no deal” - they would have not been satisfied. Fanatics should never be appeased because they can never have enough. What they did get was never voted for: nobody ever asked the British people if they wanted the last 4 1/2 years and the consequences that will flow over the coming decades.

Notwithstanding yet another vacuous soundbite - “get Brexit done” - this agreement is not consistent with democracy. The British voted for Brexit but whatever they thought they were asking for, this was not it. “Take back control of our borders” was another empty slogan devoid of any understanding that borders come in many forms and are always two sided. The recent mayhem in Kent forced many people to realise for the first time that there is an EU side to the border. The Irish border is still something badly understood and cared about even less.

A hastily drawn agreement will contain holes and anomalies. Already, British truckers are warning about the devastation that will arise from UK lorries not being able to make multiple EU pickups. Early days, but I wonder if we can spy an Irish advantage? Irish lorries using the UK land bridge could have a competitive edge over their UK counterparts. After dropping off their loads on the continent, will Irish drivers be able to make several pickups for delivery back in the UK while en route to Ireland?

A key Brexiteer premise is that the EU is destined to fail. Having morphed into a hardline Brexit party, the ruling Tory government contains backbenchers - and cabinet ministers - who hope the EU will fall apart. This is the vindication they seek. That’s not consistent with any kind of line being drawn under Brexit and points to an unstable relationship between the economic minnow that is now the UK and the massive trading bloc that is the EU.

Before the referendum, few people in the UK had strong views about Europe. Most now just want Brexit to disappear. But power in the UK now rests with the minority who know this is by no means over. Their mean spirits were revealed by the UK’s withdrawal from the Erasmus education programme, something Boris Johnson promised wouldn’t happen. As the eminent historian Max Hastings said, this deal is the first ever promise that Johnson has nearly kept. In saying that the deal contains “no non-tariff barriers”, Johnson revealed, again, that he hasn’t bothered reading what he has signed.

Economists have long lamented that ownership and control of many businesses is dangerously separated. Managers have interests that are not aligned with those of the owners. The dichotomy between ownership and control produces societal outcomes that nobody would ask for. The Brexiteer takeover of British politics has echoes of this problem: managers of the political and economic process have the power to pursue an agenda that is against the interests and wishes of the ultimate owners of the country.

That Britain will be poorer for Brexit has never mattered less. At least to the minority Brexit managerial class. Those who experience relative economic hardship won’t notice: “nobody lives the counterfactual” is the soundbite that the Brexiteers now depend on. The best economic metaphor for Brexit is that it is akin to air slowly being released from a tyre.

It would be nice to think that this will be the last Brexit related article I will ever write. I can live in hope but I expect to be disappointed.