Vietnam’s vulnerability to climate change has lessons for Ireland 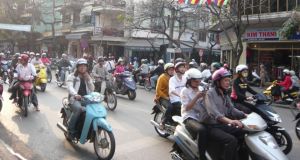 Air-pollution problems afflict large Vietnamese cities such as Hanoi, which frequently has a blanket of smog.

In Ireland we are already beginning to feel the negative effects of climate change through increased weather variability, and worse is yet to come. However, many other countries at an earlier stage of development than Ireland are facing greater risks of climate-induced damage.

One of the most vulnerable of these is Vietnam, where President Michael D Higgins was an official visitor last week. Vietnam’s very long coastline and extensive river deltas mean that it will suffer severe effects from a rise in sea level and increased storm frequency as a result of climate change.

Vietnam is now classified as “middle income” but living standards are still low. As with many rapidly growing countries, it has other very serious environmental problems that are affecting health and living standards.

Our own Environmental Protection Agency has documented adverse health effects from air pollution in Irish cities. Such air-pollution problems are many times greater in large Vietnamese cities, such as Hanoi, which has a very frequent blanket of smog, and where people routinely wear face masks in the streets. The visible air pollution issue is a real concern for the Vietnamese public, and has greatly raised the priority attached to tackling the country’s environmental problems.

In many cases, reducing greenhouse-gas emissions from burning fossil fuels, especially coal, in urban areas can bring an additional immediate dividend through improving public health. However, the huge investment needed to deal with these problems by developing a sustainable and resilient economy will be particularly challenging for developing countries such as Vietnam.

A conference last week in Hanoi, sponsored jointly by Irish Aid and the Vietnamese National Centre for Socioeconomic Information and Forecast (NCIF), examined the relationship between economic growth, energy demand and emissions of greenhouse gases.

Using a model developed by the NCIF, Irish think tank the Economic and Social Research Institute (ESRI) and Trinity College, the research showed that, in coming years in Vietnam, the growth in electricity demand and in transport demand for oil will be much more rapid than the growth in demand for other forms of energy. While, in Ireland, household energy demand for heating is very important, in Vietnam’s humid climate, due to get hotter with global warming, rising incomes will see a rapid increase in the use of air conditioning. This will significantly raise demand for electricity.

Coinciding with the visit of the President to Vietnam, Irish company Mainstream Renewable Power announced that it will invest about €2 billion in building wind farms in Vietnam – making a significant contribution to kick-starting the development of renewable electricity. If Vietnam is to meet its rapidly growing power needs in a sustainable way, it needs to see huge further investment in renewables.

Other research presented to the Hanoi conference looked at how to help agriculture adapt to climate change. Communicating with farmers through television advertising was found to be ineffective, while community meetings worked better to induce people to act. Those farms where women played a big role were also better placed to adapt. This research may hold some lessons for us, though the finding that providing advice via loudspeakers worked well is unlikely to be effective in Ireland.

One interesting use of new technology being piloted in Vietnam is the use of mass broadcasts to all mobile phones to warn people in the affected area of impending floods or other natural disasters. Iceland has a similar system to warn all those in an affected area, including tourists from abroad, how to react if a volcano erupts.

This summer, when visiting family in Minnesota, we received an emergency text with a special warning sound, telling us that a flash flood was expected in our immediate area. Fortunately the storm missed us by a few miles.

Using data on the geolocation of individual smartphones, such broadcast texts can be a very powerful instrument for providing vital public information on a local basis. Ireland should learn from Vietnam and Iceland and introduce a similar system to warn of impending disasters, such as imminent flooding on the Lee or the Dodder, or a tidal surge in the Shannon.

One speaker at the conference in Hanoi spoke about the huge problems Vietnam has with providing a clean water supply and dealing with waste water. He said that, if the necessary investment was to take place, households would need to pay for it through charges. Otherwise the huge problems with water pollution will continue indefinitely with serious health costs. Maybe the Vietnamese are ahead of us on this one.