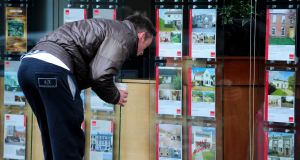 The OECD said income from wages and self-employment among working-age households increased in a majority of OECD countries between 2010 and 2014, mainly because unemployment decreased

Income inequality in most industrialised nations, including Ireland, remains at record levels, with the incomes of the richest 10 per cent recovering more rapidly since the crash, according to new OECD data.

The figures show that in Ireland incomes for the bottom 10 per cent grew faster than those in the top bracket between 2010 and 2014, perhaps reflecting the strong level of employment growth since 2012. However, Ireland’s Gini coefficient, the OECD’s measure of overall income inequality, also rose during the period – Ireland remained mid-table in the rankings with Denmark and other Scandinavian countries at the top and the US near the bottom.

The report suggests income inequality has remained relatively stable in Ireland since the crash.

The OECD noted that economic recoveries, even when weak, reduce unemployment and create job opportunities that should narrow income inequality. “At the same time recoveries can increase inequality by fuelling capital incomes [which are concentrated at the top] and increasing jobs and wages more among better-off households.”

The OECD’s report suggests weaker redistribution may reflect the introduction of fiscal consolidation measures, noting that in Ireland’s case direct taxation was reformed and several working-age social benefits were cut during the crisis.

Redistribution through taxes and transfers from governments, such as unemployment and family benefits, which helped cushion the increase in inequality among the poorest at the start of the crisis, has also fallen since 2010 in two-thirds of OECD countries, the report noted.

1 Coronavirus: Construction sector most significant part of new shutdown
2 British exceptionalism backfires in style as Johnson tests positive for coronavirus
3 Wetherspoon’s panto-villain chairman may have the last laugh
4 Volkswagen burning through €2bn in cash per week
5 UK needs to be honest about its Covid-19 strategy
6 Can husband keep savings and half the house in divorce?
7 Remote working doesn’t suit everyone, and it exposes woolly leadership
8 Retail landlords worried rents will dry up during Covid-19 crisis
9 ECB orders banks to freeze dividends and share buybacks
10 Will Covid-19 force Primark to rethink decision not to sell online?
Real news has value SUBSCRIBE