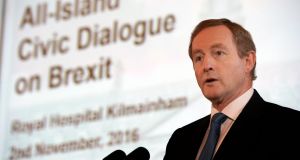 It remains unclear what Brexit will mean for trade with the UK and the issue may not be clarified until late in the forthcoming negotiations. From an Irish point of view, the clear interest is in a deal which allows free movement of goods and people between Ireland and Britain.

However, the UK may choose otherwise because of different priorities.

A crucial decision is whether the UK remains part of the EU Customs Union. It is only as part of this union that there can be a free flow of goods.

While some UK opinion asserts that if the UK and the EU were to agree to charge no tariffs on mutual trade that would be equivalent to a customs union, this is not the case.

If the UK leaves the EU Customs Union, the key problem would lie in the treatment of imports from third countries.

I bought a pair of pyjamas from Marks & Spencers (M&S) a few weeks ago, which had been manufactured in Vietnam. The appropriate EU tariffs had been paid on entering the UK as the pyjamas travelled from Vietnam to the M&S distribution centre in Britain.

As a result, the pyjamas made their way to M&S’s Dublin store without any further impediment.

However, if the UK leaves the EU Customs Union, all this will change.

Even if goods made in Birmingham can sell in Dublin without tariffs, goods from third countries, such as Vietnam, will face tariffs at the UK border, which will now accrue to the UK – not the EU.

If there were no customs border between the UK and Ireland, and if the UK’s new tariffs on third countries were lower than the EU’s, that would give an incentive for all EU imports from third countries to pass through the UK, paying UK duty and entering the EU duty-free via Ireland.

Alternatively, if EU duties were lower than the UK’s, then all UK imports from third countries could pass through Ireland, paying EU duties.

Lower tariffs by Britain on third countries would see the EU lose a major chunk of the tax revenue it earns on its external border.

Higher tariffs by Britain would see the UK losing on potential import duties. Either scenario would be untenable without a customs border.

The UK government has said it wants trade with the EU to be “at least as free” after Brexit, as today.

However, some members of the UK government seem to want to negotiate trade agreements with third countries for a post-Brexit world.

Such agreements would be completely incompatible with membership of the EU Customs Union.

No doubt the coming negotiations with the EU will clarify the position for the UK government.

From an Irish point of view, we can only hope that the UK will choose fully free trade between the EU and the UK, remaining members of the EU Customs Union, even if they choose to leave the Single Market.

The journey of the pyjamas also highlights the potential massive disruption to the retail sector in Ireland if the UK leaves the EU Customs Union.

Today, UK retailers – which are major players in the Irish retail sector – import goods from all over the world, including the EU, and sell them in their shops in both the UK and in Ireland.

The UK chains can supply their shops in Cork from warehouses in the UK – without any need to fill out customs forms.

However, if the UK leaves the EU Customs Union then the delivery from the UK warehouse will have to pass through customs at the Irish border.

Each separate category of goods in the container will have to be declared, including its origin – manufactured in the UK or outside the UK.

Different duties will be applied, depending on the nature of the goods and what country they were manufactured in.

Such a change to trading arrangements will cause a massive fracture in the retail sector supply chain on these islands.

If UK retailers choose to stay in Ireland they will face very much higher costs associated with this extra paperwork.

Given the relatively low margins in the retail trade, the result will, inevitably, be a major price increase for Irish consumers.

If UK chains decide to exit the Irish retail market, as no longer worth this hassle, retail competition is likely to seriously diminish – again serving to push up prices for Irish consumers.

The Irish Government needs to develop a strategy for a post-Brexit retail sector.