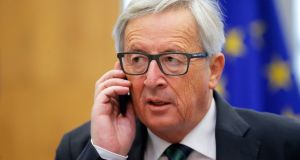 Ireland has initiated the writing of a letter to European Commission president Jean-Claude Juncker calling for further progress on the EU’s single market, in a sign that the State is aligning itself with a number of like-minded EU countries ahead of the UK’s exit from the European Union.

Ireland and the Netherlands gathered support for a joint letter signed by 10 member states, urging the European Commission to complete the single market in services, which has long been a missing element of the EU’s plan for a full single market.

The letter, which was sent to Mr Juncker ahead of next week’s competitiveness council, states that the single market has “failed to reach its potential” in the field of services, a year after the European Commission launched a much-feted single market strategy.

“A business should be able to go anywhere in Europe and provide its services without being confronted with disproportionate and unjustified requirements. Currently, this is not the case. European service providers are still confronted with too many obstacles across the EU,” it states, calling on the European Commission to “turn the principle of free movement of services into a reality”.

The 10 countries whose ministers signed the document are: the Netherlands, Sweden, Luxembourg, Estonia, Finland, the Czech Republic, Slovenia, Lithuania, Ireland and, perhaps surprisingly, the UK.

The UK, which will be a full member of the EU until it officially leaves the bloc, has long been a critic of the absence of a fully functioning single market for services, which accounts for up to 80 per cent of the country’s GDP.

In the letter, the 10 countries argue that the services sector accounts for more than 70 per cent of total EU GDP and employs more than 150 million people.

But despite the EU’s 2006 services directive, many “disproportionate and unjustified barriers” remain to doing business across the EU, the letter states, noting that businesses need to fulfil various requirements in different member states to offer the same service.

Among the measures proposed in the letter is the introduction of a European Services Card which would allow service providers to offer their wares in other EU countries. It notes that 22 per cent of the European labour force works in professions such as engineering, architecture and accountancy, but “divergent levels of regulation of these activities hinder the free movement of these professionals and their services”.

The initiative is likely to face opposition from other member states who are more reluctant to open-up their services industries to competition.

The letter states that the signatories “do not advocate lower consumer protection, lower protection of workers, or lower quality standards of our services - on the contrary, higher levels of cross-border provision of services would lead to greater consumer choice, and increased competition”.

It notes that, one year after the Commission presented its single market strategy, “we are eagerly awaiting concrete proposals.”

The initiation of the letter by Ireland and the Netherlands can be seen as an attempt by officials to join with a group of economically liberal member states ahead of the UK’s departure from the European Union. The exit of the UK – traditionally one of the strongest proponents of free trade and lesser regulation – presents a huge political and diplomatic challenge to Ireland, which has historically allied itself with the UK on most EU legislative files, with the exception of agriculture.