Problems of US working class not rooted in globalisation

Increased automation in manufacturing has eliminated many ‘traditional’ jobs 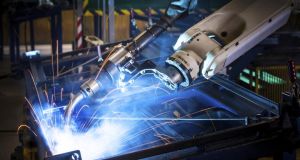 The available research shows the bulk of the decline in unskilled jobs is due to technical change within the US rather than to free trade.

The US presidential election has highlighted the disaffection with their lives among many white male voters, especially those who did not proceed beyond high school. They formed the core of Donald Trump’s support in the election.

Their sympathy was engaged by the frequent assertion that their problems were due to the expansion of world trade. The solution advocated by Trump, and also by Bernie Sanders in the Democratic primaries, was to reverse the momentum towards free trade.

A very important study of the US labour market was published in June by the current president’s Council of Economic Advisers (CEA). The study showed that men aged 25-54 with at most a high-school education have experienced a long-term decline in labour-force participation, falling from 97 per cent in 1964 to 83 per cent by 2015.

The decline in participation has been more extreme for blacks than for whites or Hispanics. In 2014, more than a third of these men who were outside the labour force were also below the poverty line.

The council has considered a number of possible reasons for men dropping out of the labour force. As the welfare system is far from generous, they rule this out as a possible cause. The high incarceration rate in the US explains only a small element of the growth in male joblessness.

As the gap between the earnings of those with and without college education has increased over time – with earnings of those with less education staying static or even falling – the evidence points to falling long-term demand for less-skilled workers. The council concludes that this is the main explanation for the increased proportion of low-skilled men who have dropped out of the workforce.

This raises the question as to why unskilled employment has fallen in the US.

While the Trump and Sanders campaigns blamed free trade for the problems of Americans with limited education, the evidence suggests a very different diagnosis and an even more radical set of solutions.

The available research shows the bulk of the decline in unskilled jobs is due to technical change within the US rather than to free trade. Increased automation in manufacturing has eliminated many “traditional” jobs.

Car manufacturing has moved from Detroit to the southern US, not China. Such manufacturing jobs that have gone overseas would have been largely done by robots had they remained in the US. In addition, coal-mining jobs have been badly hit by a move to gas as a cleaner and cheaper fuel. So trade agreements are not primarily to blame for falling blue-collar jobs, whatever the political slogans may say.

The CEA, therefore, doesn’t see restricting trade as the solution. Instead it proposes a comprehensive programme of measures to protect the potential losers from trade, as well as the even greater number of losers from the technical changes already occurring in the US economy. This is a very different set of solutions to the anti-trade rhetoric of the US election.

The CEA proposes that that the government should stimulate the economy to create additional jobs, especially through more investment in infrastructure – which is part of the Trump agenda. They counsel active labour-market policies, similar to the focus on such measures in Scandinavia; increased investment in training and education; assistance in job search; and the placement of unemployed workers into in-demand jobs.

The US stands out among OECD countries in its lack of provision for maternity leave. Neither does it pay child benefit. The CEA recommends introducing paid family leave, as well as increased assistance for childcare.

They also advise reforming the US tax system, to reduce the tax penalty for second earners.

As high levels of imprisonment have played some small part in increased joblessness, the council recommends reform of the criminal justice system.

Finally, it suggests that the minimum wage should be increased and that there should be support for collective bargaining “and ensuring that workers have a strong voice in the labour market”.

It is no wonder that the Obama administration is decried by Republicans as socialist – the programme set out by the council is just what one might expect in a Scandinavian socialist party. However, given the sweeping wins across the board for Republicans in Congress, the Senate and the presidency, it appears this wish list of policies stands little chance of being implemented. If restrictions are placed on trade by the new administration, it will, if anything, make things worse.