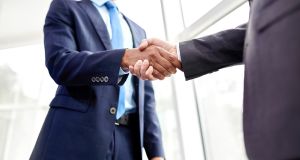 Nearly half of Apec chief executives expect growth to be up to 5-6 per cent annually for the next three years. Photograph: iStock

More than half the chief executives in the Asia-Pacific Economic Co-operation (Apec) region plan to increase their investments over the next 12 months, despite subdued prospects for revenue growth, and are eyeing diversification abroad which may boost Ireland, according to PwC’s Apec 2016 CEO Outlook survey.

The survey also shows that, following the UK Brexit vote, Ireland is seen as the “most logical” gateway into the European Union for foreign direct investment (FDI) from the Apec region.

“With almost a third of investment increases to be focused outside of the Apec region and diversification to be in seven other economies, compared to six last year, Ireland has a huge opportunity to attract Apec businesses to locate here,” said PwC partner Andrew O’Callaghan.

“Post Brexit, Ireland will truly be the most logical gateway into the European Union for FDI from the Apec region,” he said.

PwC surveyed 1,154 business leaders in 21 Apec economies for the survey, its sixth, in the run-up to the annual Apec chief executives’ summit in the Peruvian capital, Lima, earlier this month.

“A subdued level of confidence in the business outlook is hardly surprising given geopolitical events this year. What’s critical for the region is that business leaders hold their nerve on investment and innovation,” said O’Callaghan.

Nearly half of Apec chief executives expect growth to be up to 5-6 per cent annually for the next three years, which means the region continues to offer great opportunities for companies based in Ireland to invest, particularly in the area of technology and digital.

The outlook for China is decidedly mixed. Almost half the chief executives surveyed believe GDP in the world’s second-largest economy will grow on average at or below 5-6 per cent a year over the next three years.

At the same time, China can’t be ignored.

“CEOs are not ignoring the growth potential for their business,” said Mr O’Callaghan. “Over the next three years business leaders want to build their brand, expand inland and work in partnerships. These are the strategies most common to business leaders, foreign and domestic, with investment in China.”

Many European firms operating in China and in the Apec region have been vocal in complaining about a lack of a level playing field when it comes to investing, and that they feel regulations are often weighted against them.

The regulatory environment in the region remains an issue for respondents, such as lack of transparency and corruption.

PwC tax partner Yvonne Thompson said it was significant that Apec chief executives were looking beyond the slowdown to longer-term prospects.

“China is a prime example. Its scale and skills means concerns about its slower economic growth are not enough to put business leaders off investment and expansion. China remains a powerhouse of potential for Apec businesses for new products and partnerships,” she said.

More than half – 58 per cent – expect the regulatory environment to exert “more influence” on their investment decisions in Apec economies over the next three to five years, suggesting that investment will go to those countries with a conducive policy environment.

The prospects for free trade in the region look dim, with 53 per cent saying progress is slow, although there is an uptick in the number seeing more better progress.