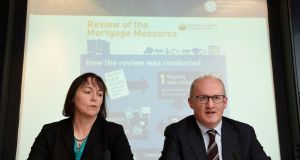 Deputy Governor of the Central Bank Sharon Donnery and Governor Philip Lane announce first-time buyers will now require a 10 per cent deposit when applying for a home loan, regardless of the price of the property . Photograph: Clodagh Kilcoyne/Reuters

The Deputy Governor of the Central Bank, Sharon Donnery denies that the Central Bank came under any political pressure to make the changes to mortgage rules announced on Thursday.

She said that the changes are ‘limited refinements’ and that there had been complete transparency in the entire process.

Ms Donnery said that there is still a 90 per cent requirement and that borrowers will have to have ten per cent of a deposit.

The amounts in question are a ceiling not targets, she told RTÉ’s Today with Sean O’Rourke show. “We would urge borrowers to consider how much debt they can take on and we would urge banks to be prudent in their lending.”

She pointed out that three quarters of first time buyers borrowing over €220,000 put down a larger deposit.

Ms Donnery said the new rules do not target a particular level of housing prices or market growth.

“There are risks of house prices going up and also risks of them going down. It is a very complex dynamic. If supply is increased there could be a change in price.”

Ms Donnery said that the Central Bank had been completely transparent in their public consultation on mortgages and that the entire process could be viewed on their website.

She said that the change in rules was a limited refinement on the basis of the responses they had received during the public consultation.

On Wednesday , the Central Bank announced a number of small changes to its rules, which were introduced in February 2015.

In addition, the current two-month validation period for loan approval will be extended to four months in recognition of the fact that some house sales can take longer than the average three months to close.

Second-time and subsequent buyers will continue to need a 20 per cent deposit for their applications. However, the Central Bank has increased the percentage of each lender’s loans that can be exempt from this limit from 15 per cent to 20 per cent.

Central Bank governor Philip Lane indicated the regulator will intervene in the event of runaway house price inflation that might arise from tweaks to its mortgage lending rules and the planned tax rebate scheme for first-time buyers.

“If we see that there’s a perverse, unwelcome interaction between excessively rapid lending and excessively rapid increases in house prices, then we can intervene,” he said at the unveiling of “limited” changes to its macroprudential rules.

Speaking on Thursday, Minister for Housing Simon Coveney said the Central Bank made the right decision when it changed its first time buyer rules .

The Central Bank and the Government both agree that something had to be done, he said. The Help to Buy scheme and the new Central Bank rules are complementary and will help people to get a deposit together, he said.

“The Central Bank recognises that putting together a deposit has been the biggest obstacle to people getting on the property ladder,” he told Newstalk Breakfast.

Mr Coveney said that last year only two per cent of new homes were purchased by first time buyers.

“We have a generation of first time buyers who are locked out of the market. Now we’re helping to relieve that.”

The Minister added that he will be announcing a rent strategy in the next few weeks including the concept of affordable rentals in some parts of Dublin aimed at ‘squeezed’ middle income earners.

He said a balance needs to be found to protect tenants and to do it in a way that doesn’t undermine people who want to invest in rental properties.

Meanwhile, the head of the Construction Industry Federation, Tom Parlon has described the changes to the Central Bank’s mortgage rules as “modest and conservative but welcome.”

The changes will provide an impetus to the construction industry he said.

“There is a new cohort of buyers who will now be able to apply for a mortgage,” he told RTÉ’s Today with Sean O’Rourke show.

“Builders can only build if people have more security and can get mortgages to buy homes.”

He said there were lots of people with sites that could fit 100 houses currently building only 20 houses because only 20 people would get mortgages. If more people can get mortgages then builders will build more houses, he said.

“The market will respond. As soon as there is demand for first time buyers then there will be extra houses,” he said.

“It is going to be slow to double housing output, it will take a few years.”

Mr Parlon said building costs across the country are similar but the major factor in the difference in house prices is the cost of sites, which can be as little €20,000 in regions outside Dublin and over €100,000 in the capital. Development costs also vary.

He said the commercial construction sector is doing very well, with 70 cranes now visible on the Dublin skyline. “There is massive activity in the commercial sector,” he said.

He predicted 100,000 extra jobs in the sector in the next four years with an increase in investment from this year’s level of €15billion to €20billion in 2020.

1 Household wealth jumps by 74% since last recession - report
2 Will brother’s widow get half of our parents’ estate when they die?
3 Should I switch bank now with Ulster Bank at risk of closing?
4 EU said to be leaning towards appealing Apple tax decision
5 House insurance: save yourself money by reviewing your policy
6 Edwards to create 120 jobs in Dublin as part of $7.5m investment
7 Banks face ‘hectic’ loan restructuring as payment breaks end, Goodbody warns
8 Facebook unveils €4.7m grant programme for Irish SMEs
9 Legal tech company Bundledocs raises €600,000 in funding
10 Isme to support legal action against pension tax relief limit
Real news has value SUBSCRIBE