So this is what Brexit could look like . . . it is not pretty 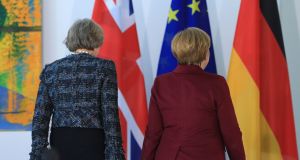 Leaving: Theresa May (left) and Angela Merkel – May was warned by business leaders at the CBI conference about the risk of a “cliff edge” as the UK leaves the EU. Photograph: Krisztian Bocsi/Bloomberg

So this is what Brexit might look like. In a working paper just published, two ESRI researchers have, for the first time, looked in detail at what the imposition of trade barriers after Britain leaves the EU might mean. And it isn’t pretty.

Trade would be hit seriously in sectors that are important for Ireland – particularly food – leaving us the most exposed of the EU economies to a so-called hard Brexit. This brings challenges for policymakers here and also for companies, made all the more difficult by the major uncertainties that remain about what will actually happen.

The scenario the ESRI researchers examine may be avoided – if Britain and the EU can strike a deal to do so. But it is clear that things could also be even worse. If, for example, Britain decides to break its trade ties completely with the EU and to cut tariffs on goods coming from other countries , greater tensions could develop.

We could then be looking not only at special tariffs – or import taxes – but also at customs checks and barriers which could cause further disruption. For example, if Britain decides it wants to import loads of cheap beef from Brazil and Argentina, the rest of Europe will want to ensure there are controls in place so that it is not shipped on freely to other countries.

So what exactly are we talking about here? UK prime minister Theresa May was warned by senior business leaders at this week’s Confederation of British Industry (CBI) conference about the risk of a “cliff edge” as the UK leaves the EU. This is what they are talking about.

If talks on Britain’s exit start next March, they should finish by March 2019. These are purely “divorce” talks , looking at the terms on which the UK will leave.

However, agreeing new rules on how the UK and the EU will trade with each other in future well require a prolonged further period of negotiation. So the question is, what will happen after the UK leaves the EU but before a new trading deal is sorted out – a period which could, conceivably extend for five years or more.

Britain and the EU could decide that current trading arrangements would continue until a new deal is done. But can you really see this happening? Certainly the current political temperature between London and Brussels would suggest otherwise.

The rest of Europe does not want to make it easy for Britain (or anyone else) to leave. They will surely seek significant concessions in return if current trading arrangements were to continue on an interim basis.

Senior EU political leaders have already stated that Britain would have to make major concessions on plans to restrict immigration and remain subject to EU rules and financial contributions if it wants to stay in the single market in the long term. While we can only speculate at this stage, this would suggest that they are most unlikely to give Britain a “ free pass” to retain current trading arrangements after they leave the EU and before a new deal is done.

It might be in the best economic interests of both sides for this to happen. But this is now, above all, about politics. So while May told the CBI conference that she would try to avoid the “cliff edge”, it is far from clear how she can do this. 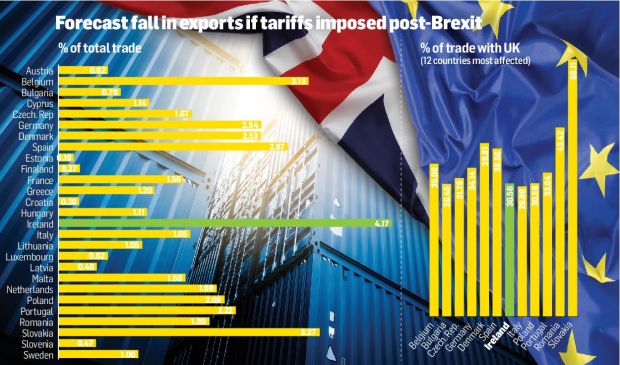 The ESRI paper, by economists Martina Lawless and Edgar Morgenroth, peers over the edge of the cliff and looks at what might happen. They acknowledge that nobody can be certain how this will play out. But it is an important and detailed analysis.

Most of the research so far on the impact of Brexit takes an overview approach, looking at the likely hits to trade, employment and GDP. The ESRI paper starts from the opposite direction, looking at how some 5,200 products might be affected and collating it all to assess the overall impact.

If Britain leaves the EU without an some transitional arrangement on trade, the paper assumes the two sides would trade on the basis of rules set down by the World Trade Organisation (WTO), the body which oversees world trade. The EU trades with the rest of the world on the basis of a set of tariffs and rules. The assumption is that it would trade with Britain on the same basis – and that the same rules would apply for trade in both directions.

The ESRI then applies the tariffs – the special import taxes – which would apply on imports from the EU to the UK and, presumably, vice versa. This is not straightforward. There are 5,200 products involved and tariff levels vary from 0 per cent to 50 per cent,or potentially even higher in some cases.

Many of these tariffs are a result of history – and so they tend to be highest on more traditional and heavier products, such as food and drink, for example.

The bottom line, it reckons, is that there could be a 30 per cent drop in EU exports to the UK and a 22 per cent fall in goods going in the opposite direction. In some sectors where high tariffs would apply – parts of the food industry, clothing and textiles – trade could be severely disrupted. Trade in cars could be more than halved.

Ireland is particularly exposed in a number of respects. The total share of our exports going to the UK is close to 14 per cent, the highest in any EU state. Also, Ireland imports a lot from the UK – third only behind the much bigger markets of Germany, France and the Netherlands. As well as consumer imports of British goods, this reflects the close links in business supply chains between the two islands.

In the scenario sketched out by the ESRI researchers, Ireland’s food and drink exports to the UK would be particularly exposed, with potentially high tariff levels coming into force. In some cases, companies might be able to readjust products to limit the damage – for example there are different tariffs on yoghurts with different fat levels and so on. But roughly half of agri-food exports from the Republic go to the UK, and sectors such as dairy and meat would face serious disruption.

If a 10 per cent tariff is slapped on your product – increasing your cost of selling in to the UK – then you might adjust. If it is 30 per cent, then it is probably game over in terms of selling to the UK market.

Likewise, imports on to our supermarket shelves from the UK would go up in price, in some cases sharply, more than wiping out the impact of sterling’s post-Brexit decline.

This could, of course, offer new opportunities for domestic producers but the problem would be the huge level of disruption. This is why Britain’s business leaders are starting to panic about the “cliff edge”. Some sectors might continue largely unscathed – there are few or no tariffs on pharma products, for example – but in sectors such as clothing, textiles and many areas of the food sector, the level of upheaval could be very significant. And it might be not much more than two years away.

The strategic difficulty for the Republic is that we are particularly exposed because of our strong trading links with the UK. The average level of tariffs applied on Irish exports to the UK would be 10 per cent, not far off twice the average for the EU as a whole. Because of all this, our reliance on the UK is much greater than the average and the costs of this kind of “hard Brexit” are thus much higher from an Irish point of view.

So the risk for us of getting caught in the middle of a politically driven battle are significant. Let’s hope that the huge economic risks on both sides mean Britain and the EU will pull back from the edge of the cliff.

AND FOR THE SCIENCE BIT

Tariffs is the name given to customs duties, or special taxes, which countries apply on imported goods. They are generally levied as a percentage of price, but in some cases are based on the weight of the product.

In certain instances, both are used. For example, the tariff the EU imposes on fresh or chilled boneless bovine meat is 12.8 per cent of the value of the product, plus €303 per 100kg.

As this pushes up the cost to the company exporting into a particular market, the higher price is often passed on to the consumer. In some cases, where tariffs are high, this makes trade impractical.

Tariffs have typically been imposed by countries to protect domestic producers, particularly new industries or those most open to import competition. Other trade barriers can also apply, such as quotas which limit the actual level of imports from particular countries.

An important part of the EU single market is that tariffs are not imposed on goods and services traded across national boundaries within the trading bloc.

Tariffs levels vary so much because they were imposed by different countries at different times over many years . A process was started in the 1950s under the GATT – now the World Trade Organisation – to reduce tariffs and other trade barriers . Through a range of deals, tariffs were cut but, as this was the subject of complex negotiations, tariff levels still vary hugely and tend to be higher in more traditional sectors.

The risk of the reimposition of tariffs is a key reason why Britain leaving the EU could lead to such disruption to trade and why negotiating a new deal could be so complex.