Netflix loves gold statuettes almost as much as junk bonds 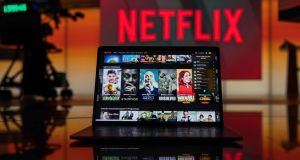 Netflix, which announced this week it was selling $2 billion of bonds, can still qualify for the Oscars with its limited cinema release strategy. Photograph: Chris Ratcliffe/Bloomberg

It’s a verdict that has been interpreted in showbiz-friendly terms as Martin Scorsese one, Steven Spielberg nil. More accurately, the result is Netflix one, much of the rest of Hollywood nil. More accurately still, it is a victory for the small screen over the big.

The Academy of Motion Picture Arts and Sciences has voted to stick with its current eligibility rules, meaning competing films only need to be shown in a cinema in Los Angeles for a mere seven days to qualify for the Oscars.

The Netflix-distributed film Roma was eligible at this year’s ceremony despite its blink-or-miss-it cinema run, though its three-Oscar haul notably didn’t include the key Best Picture prize. Now, despite strenuous objections from cinema-loving power players like Spielberg, who believes primarily small-screen releases should be eligible for Emmys instead, Netflix could be back in the Oscar hunt as soon as next year.

Its most likely horse in the race is The Irishman, Scorsese’s latest hitman flick, which is expected to have only a limited cinema release this autumn before being added to the streaming platform.

Yes, it’s just an honour to be nominated, but winning gold statuettes matters to Netflix. A lot. For such a fast-growing company, it is almost touching how much it openly craves this boost.

But then Netflix must chase all the angles in an increasingly crowded business. It must keep adding subscribers in order to satisfy shareholders and justify its strategy of raising finance on junk-bond markets to pay for the high volumes of commissioned content it needs to sustain its position.

The streaming company said this week it would sell a further $2 billion (€1.78 billion) of bonds, adding to a $10 billion debt load. A sum of $2 billion sounds like a lot of money, but everything is relative. According to its 2018 financial accounts, Netflix last year spent almost $2.4 billion just on marketing.

And don’t put your popcorn away yet: there may be a sequel to this Hollywood clash. Academy president John Bailey said its rule could be revisited next year. If exhibitors kick up enough of a stink, Netflix may still have to either change tack or sacrifice the warm glow of a jaunt up this particular red carpet.