Green light for sale of reit 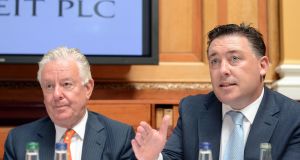 The Republic’s first real estate investment trust (reit), Green Reit, could shortly be no more. Its board, led by chairman Gary Kennedy, offered the property company for sale yesterday, arguing that this was the best way to get value for shareholders, whose stock has been trading at discounts of as much as 22 per cent to the value of its assets.

Apparently, it is not unusual for European reits to trade at discounts to the value of their properties. In fact, it does not make sense for investors to buy the shares if they value such companies at more than their assets’ worth.

Six per cent is a normal discount for European reits, once they do not own retail properties – Green does not. Those that do own shops trade at about 16 per cent less than asset values.

One of the problems for reits is that solvency rules restrict the amounts that key institutional investors such as insurers and life companies can put into them. Those rules require insurers to keep more cash in reserve when they buy shares in a stock-market listed company.

So it costs them more to invest in listed property companies, including reits, than if they buy directly into the properties themselves. This limits the pool of cash available to invest in reits, which limits demand for their shares, which in part explains why they tend to trade at discounts.

Selling Green, or more particularly its properties, allows the company shake off those limitations.

Nevertheless, the solvency rule does not explain discounts of 16 to 22 per cent. Green operates in a commercial property market that has broken records for office letting over the past two years.

Just two weeks ago, its rival Hibernia Reit sold an office on Dublin’s docks for €35.6 million, earning a €7 million profit in just 14 months. That building will give its new owner a yield of 4.65 per cent, indicating that rents are generous and support high prices. Investors know all this, but both reits’ share prices have still consistently traded at what one analyst calls an “anomalous discount” to asset values.

Green board’s problem is that potential buyers may well take the same approach when offered the entire package rather than individual properties. If that is the case, any offers could still fall short of expectations or reasonable value for investors, leaving Green Reit back where it started.